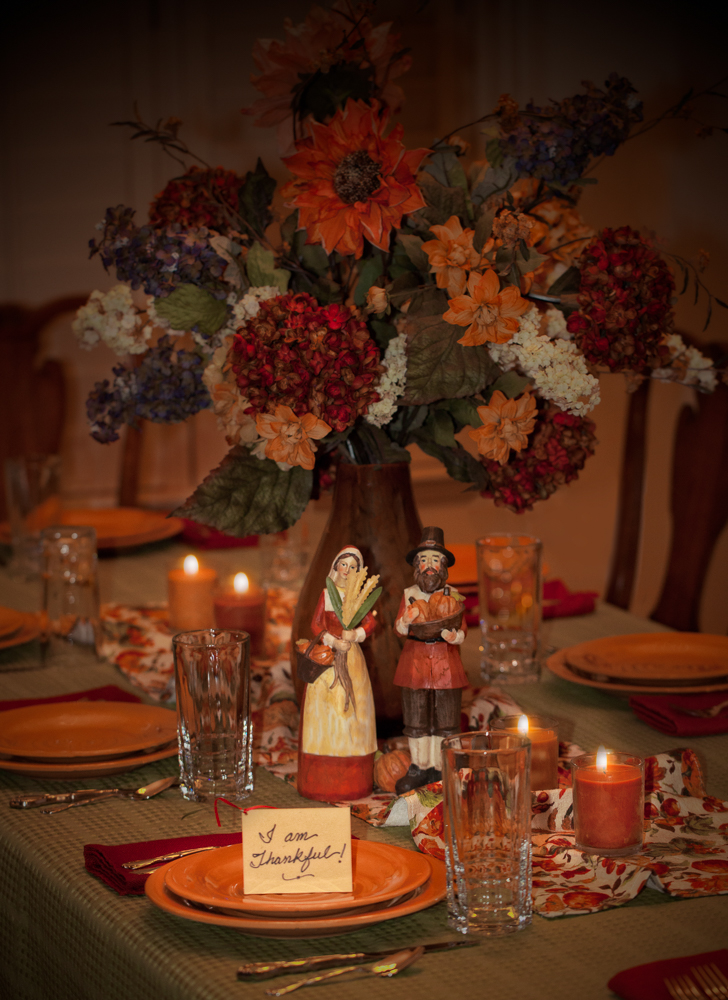 
Today was busy!  Shopping, cleaning, cooking... all the preparations for our Thanksgiving celebration tomorrow.  My mom taught me that setting the table the night before company comes not only saves time on the big day, but also creates a peaceful feeling and a few minutes to reflect on the reason for the celebration.  I continue my mom's tradition.  After setting my table tonight, I lit the candles and took a few minutes to enjoy the quiet and to say a little prayer of THANKSGIVING for all of my many blessings, far too many to name, and far more than I deserve!
HAPPY THANKSGIVING FRIENDS & FAMILY!
Posted by What Karen Sees at 9:00 PM 14 comments:

She Bows in Submission 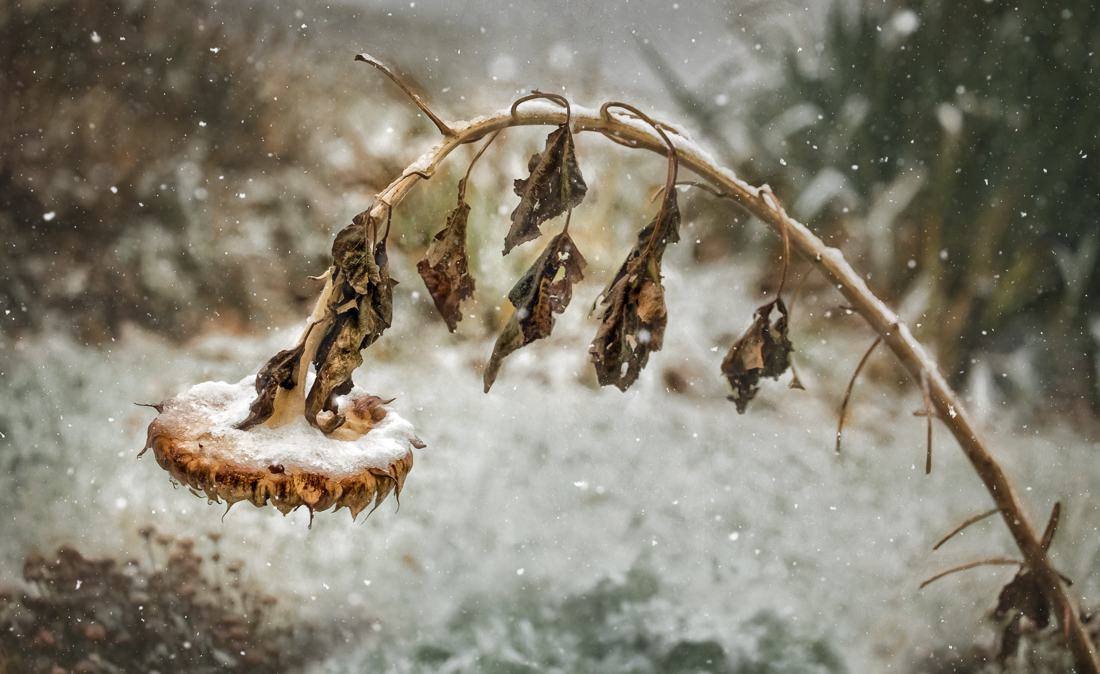 She bows her head in submission
to her inevitable fate as winter finally arrives.
I hope she knows I still see beauty and grace in her old age.

It is a blessing to see the beauty in nature
in all seasons of life and death.

This was shot out of my bedroom window yesterday,
documenting the first snowfall of the season
at our northern Utah home.
Posted by What Karen Sees at 10:39 AM 23 comments: 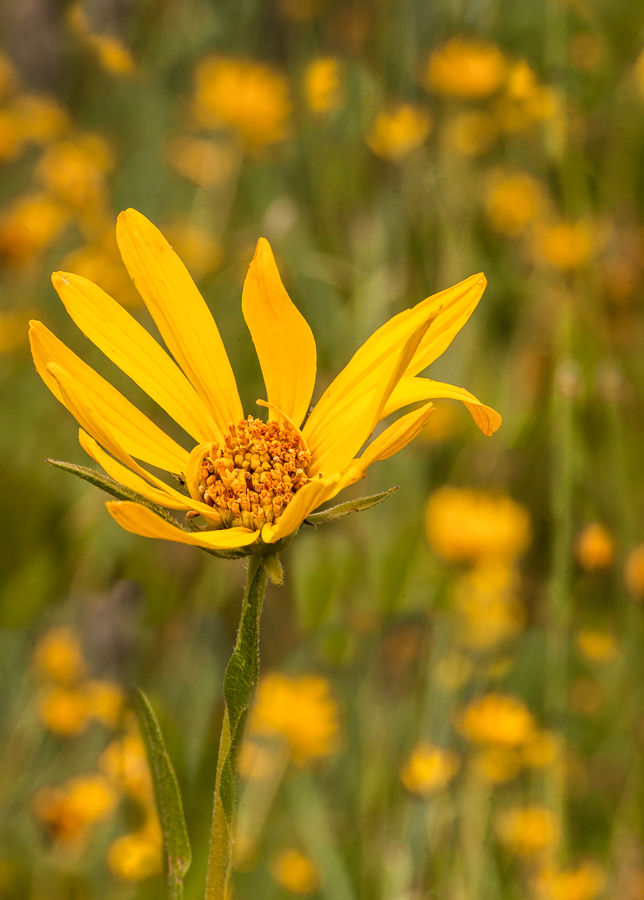 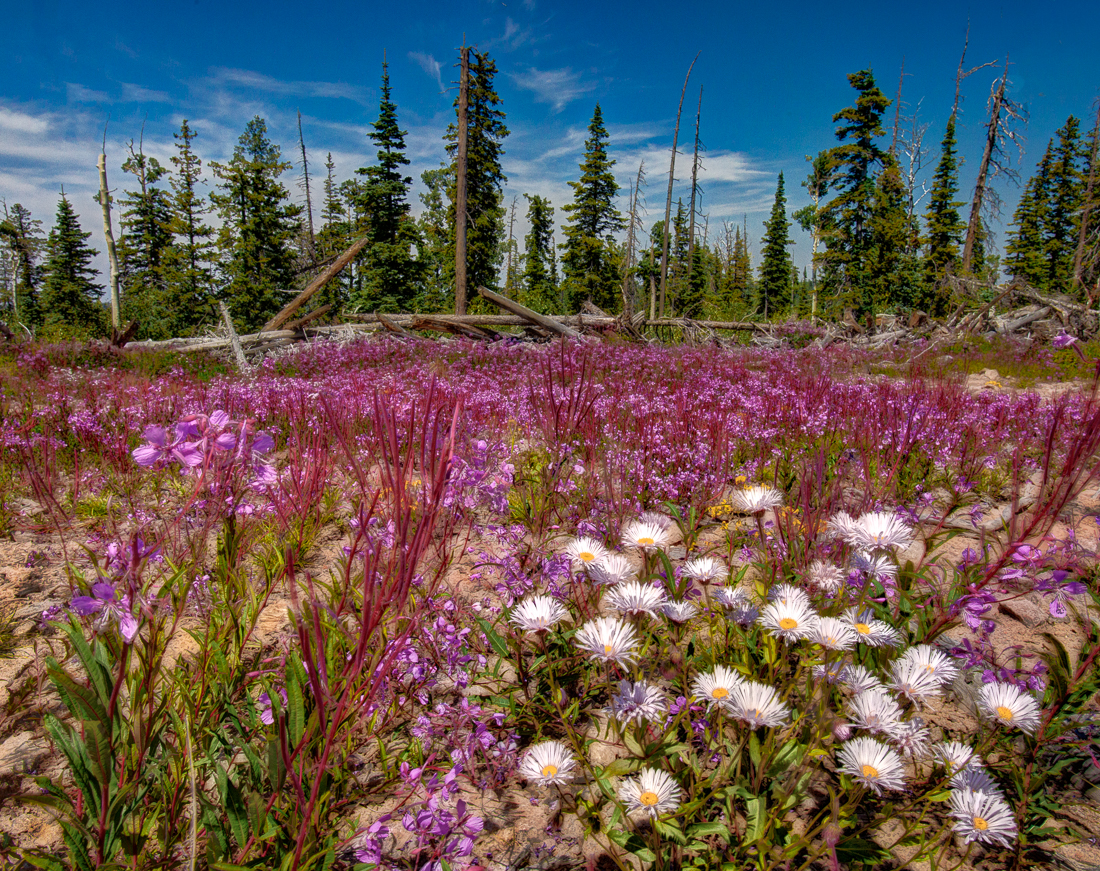 We were on a RZR ride late last summer near Bryce National Park.  One day we explored some of the surrounding area, and found beautiful 'secret garden', even though it was very late in the season for most Utah wild flowers.  (Would it spoil this picture for you if I said there is a very, large, very ugly cell tower right next to where I was standing!)
Posted by What Karen Sees at 12:29 PM 12 comments:

As photographers, when do we know our work is done and our photo or image is ready to print or to publish on the internet???

This decision can truly be confusing for photographers.  Back in the day, we would choose what kind of film we wanted to use, we'd take 36 shots, and then hope that a few would be 'keepers' when they were developed.  Pretty simple!  (I'm talking here about the average amateur photographer who did not have their own darkroom and did not develop or retouch their own work, which in those days, took considerable time and effort.)

With the technology of today, the possibilities are endless.  We still have the option of printing or publishing SOOTC (straight out of the camera).  But with the editing programs, plugins, apps, that are readily available today on our computers, pads and phones, the sky is the limit.  We can alter our images in minor ways, or we can create composites or manipulate our images so they are unrecognizable from the original shot.

Here are some questions:  When is enough, enough?  How much manipulation should I do?    How many editing programs should I buy?  How many different 'looks' should I create before choosing the 'best' one? How much time should I be spending on the computer to edit an image?  Do you find yourself sitting at your computer, looking at your images, and asking yourself some of these questions? I do!

The variety and complexity of the choices today's photographers have to make can be mind boggling, because as you already can guess, there is absolutely no correct answer to any of these questions.

The following is a good example of what I'm talking about: 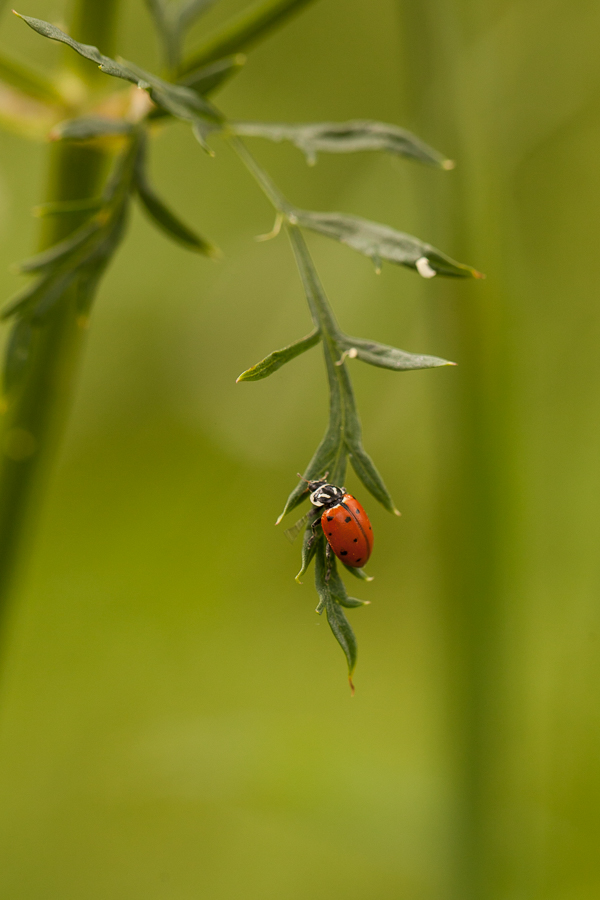 SOOTC
Here is my original image.  It is acceptable, but for me, kind of boring.  I tend to not like totally out of focus backgrounds.  So it's time to start editing and experimenting. 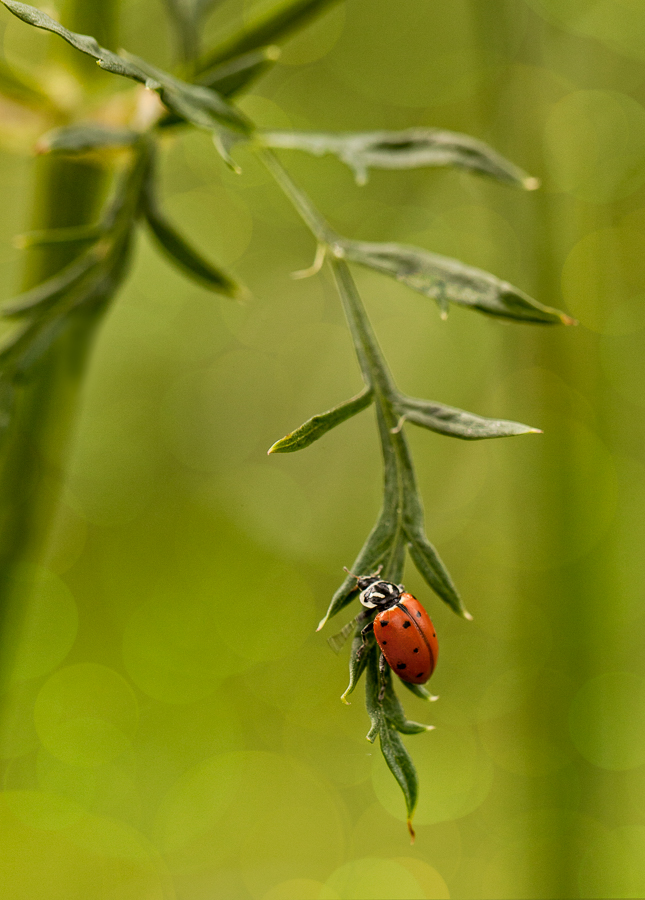 Adding Bokeh
Since I'm a big fan of bokeh and interesting lighting and lens effects, I came up with this.  I think it is a bit more interesting and holds my attention a bit more than the first image.  But is this the best I can do? 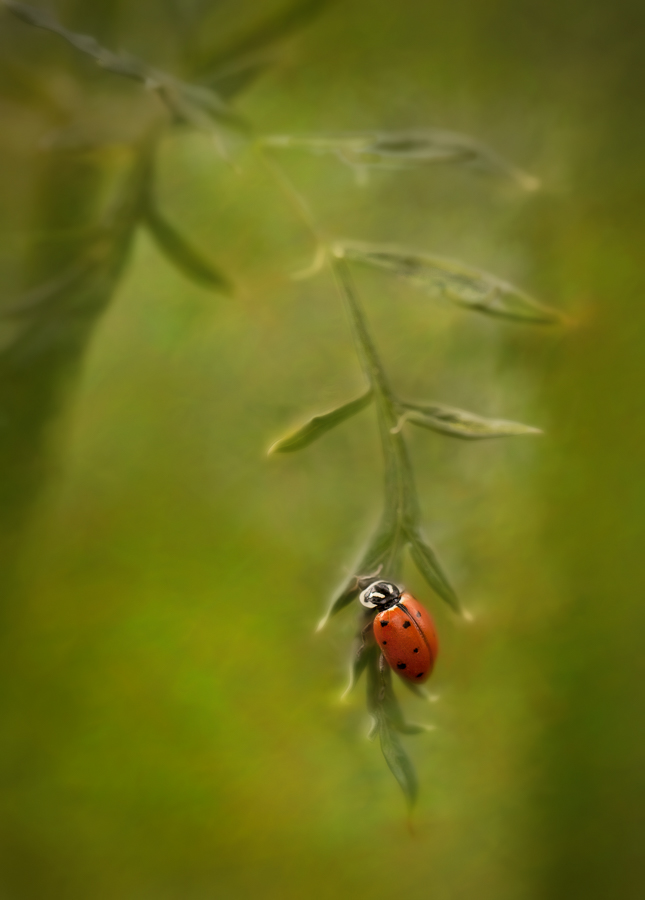 Softened and Topaz Impression
Recently I've seen some beautiful images on the internet where the artists have used the Topaz Impression editing program, so I downloaded a trial version to play around with.  I softened this image, while keeping the ladybug sharp, then added a texture.  When I manipulate a landscape or nature shot, I usually want to viewer to feel the image is 'believable' and could be SOOTC, so I strive for editing that is not blatantly obvious.  This treatment created a different and interesting look, but was not quite believable to me. 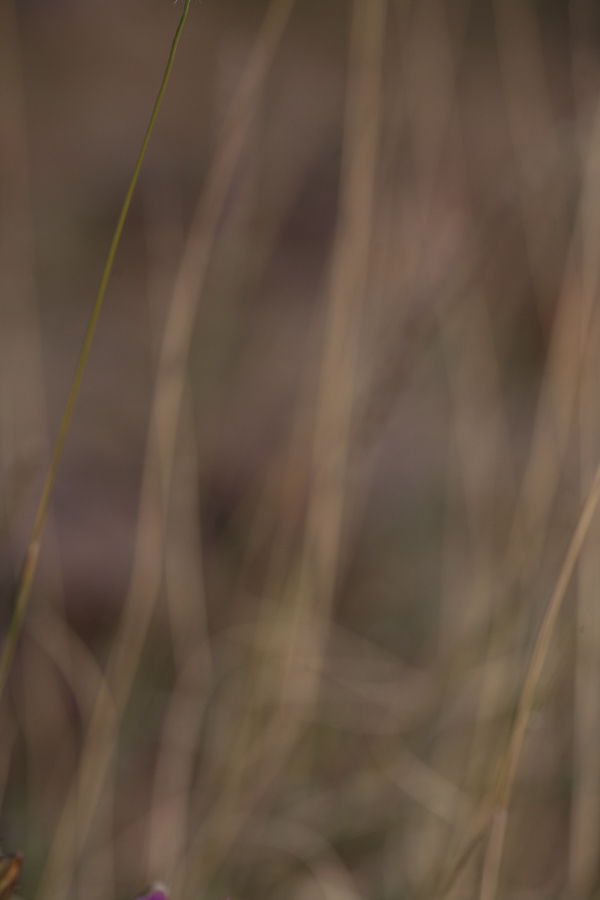 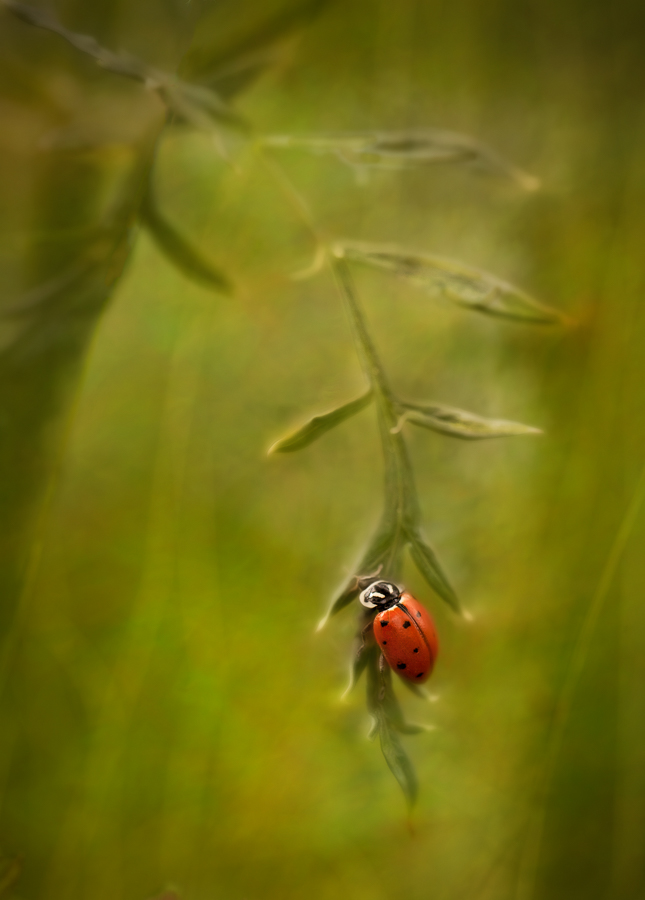 Blended in a Second Image
I often shoot out of focus images of foliage, flowers and other nature scenes to use as background interest.  This is what I did with this photo.  For me, adding some form and a hint of background foliage makes this image more believable and interesting.

Of course this is all personal preference.  Some would prefer the SOOTC shot, others might prefer one of the other versions, and others would have a totally different editing idea.  But at some point we all have too decide when enough is enough.  We need to develop the ability to learn when our editing improves an image, and know when to stop before we over manipulate and ruin an image.