Well, I'm off on yet another tangent!  I was sorting and organizing my photographs from one of our travels, reliving memories, and recalling the adventures we had.   I thought I'd post one on the blog, but there were so many I loved that I couldn't decide whether it should be a landscape, an interesting person, etc.  Then I had a brilliant idea....well, maybe not  exactly brilliant.  Anyway, every so often I will have a theme week, where all the posts that week will be about the same place, the same subject,  etc.  The week will still include 'Tech Talk Tuesday', 'Wednesday Workday', and 'Phriday Phun', but all with the same theme, and I'll end the week with my favorite picture posted on Saturday.  (P.S.  If anyone has a theme they'd like for the future, let me know!  It could be somewhere you know I've been, or maybe additional photos of something I've already posted.)


This will be FANNING ISLAND week.
That's great you say, but where in the world is Fanning Island????  Fanning Island (also called Tabuaeran), is a very small atoll that is part of a group of atolls called the Republic of Kiribati and sits just off the equator in the Pacific Ocean.  It is close to the Marshall Islands and in between New Guinea and Hawaii.  It is a very small crescent speck of flat land covered with palm trees and white sand beaches.  Inside the 'crescent' is a beautiful aqua green lagoon.  This lagoon is almost completely enclosed by the small strip of land circling it,  and is about 7 miles in diameter.  The temperature year round varies between 80 and 82 degrees.  (Mmmmm, my kind of place!!)   It is probably the most primitive, remote place I will ever see in my lifetime.  There are no towns, (just a few small villages), no electricity, no plumbing, no medical or dental,  no commerce, no internet, in fact, no communication at all with the outside world.  No air strips, no paved roads, no restaurants, no motels.  Do you get the picture?   There are a little over 2000 citizens living here in true 'grass shacks' subsisting on fish and tropical fruit or what they can grow.  The only way to get there is by a decent sized boat, and it takes two days from Hawaii.  To my knowledge, there is only one 'white' man, or I should say outsider, living on the island.   Over 28 years ago, a young surf bum from California was traveling the world looking for adventure and somehow made it to Fanning Island, and he has lived there ever since.  He married a native girl and lives the primitive life they do.  He does have a boat and keeps in touch with family and friends by traveling to Hawaii occasionally.  Also, there is a supply ship from Australia that stops periodically.  It has been said that Fanning Island is about as close as it gets to an unspoiled, remote, natural tropical paradise on earth at this time.........

And then came the cruise ships!!!  A few years ago we wanted to cruise the Hawaiian Islands, (our first cruse and first time in Hawaii).  The cruise included two days at sea to Fanning Island.  We learned that because the cruse line was foreign, regulations required the ship to make at least one stop at a foreign port.  How they came up with Fanning Island, I'll never know.  There is no port, the ship anchors out in the ocean and we were tendered in.  The cruise line worked with the Republic of Kirabati to make a portion of the island available for tourists.  In one small area they have tables to eat lunch brought from the ship, and a large bathroom facility.  The cruise line also worked to help the people there.  Among other things, they were instrumental in building a simple primary school, and they allow the people access to the ship's doctor while in port.  Through the week I'll give you more information about this unique place to go with the photos I'll post.  One more bit of information.  I just read that the cruise line has now stopped going to Fanning Island.  We may very well have been given a window of opportunity to see what only a few others will now get to see, and they will have to hire a private boat for the trip.

Below are our first glimpses of the land itself.  (Sidenote:  If you get dscouraged and don't think your photography skills have improved with time, just go back a few years and critique your earlier work.  I think I have improved since I took these photos.) 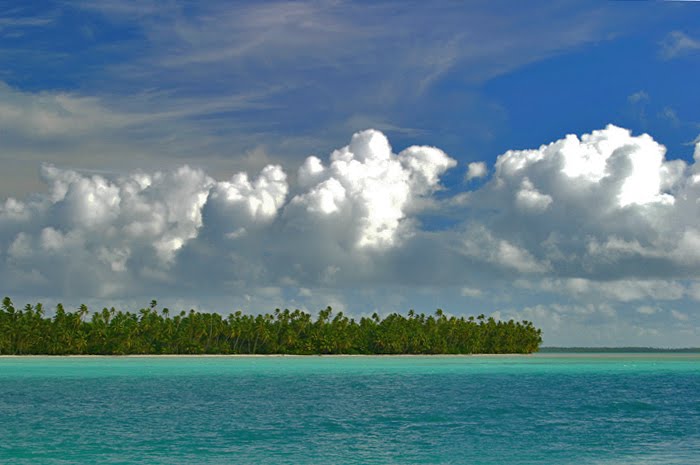 This was our first view of Fanning Island from the ship.  Just a little speck of palms in the middle of the ocean.  We were tendered into the lagoon through the small inlet on the right.  This part of the crescent is only about a stone's throw wide.  I wondered if they had ever had a tsunami here, as it would mean certain death to everyone on the island, because there is no high ground for safety. 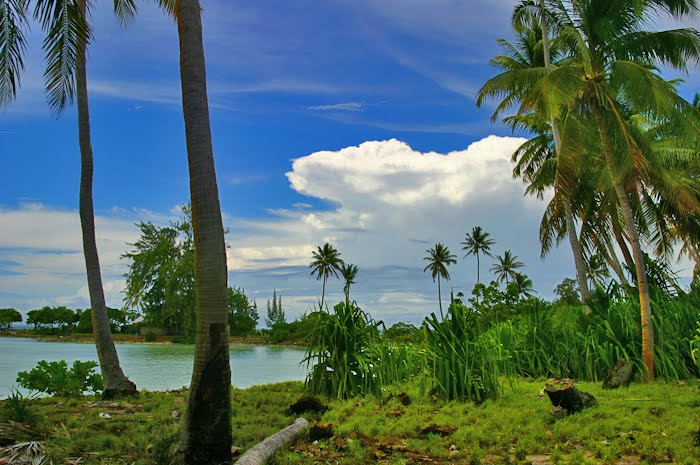 A stroll along the lagoon side. The natives fished in canoes and primitive boats.  I believe the only motorized boats were owned by the 'outsider' who after many years on the island was granted citizenship.  On the other side of the lagoon in the distance is the far side of the atoll. The Norwegian Wind
Posted by What Karen Sees at 7:43 PM 4 comments: