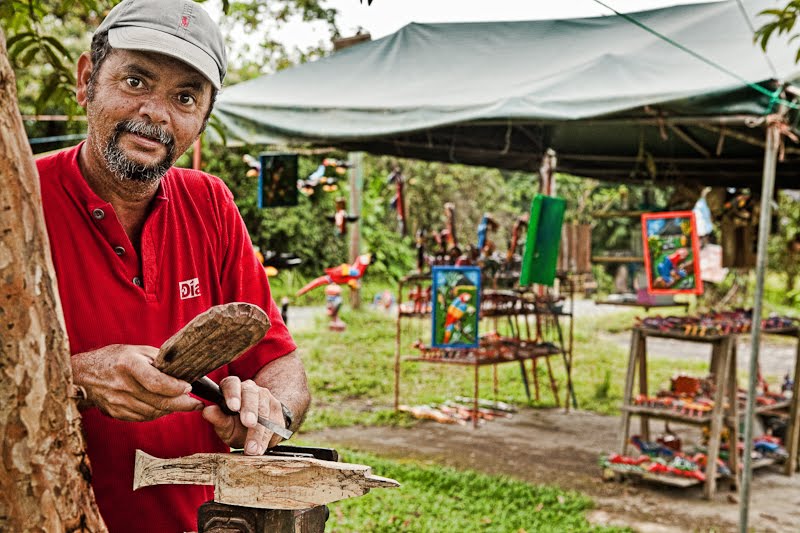 Primitive Wood Carver - Costa Rica
I haven't done a 'Wednesday Workday' for awhile, so it's about time.  As I was choosing a photo for this post I began reflecting on something another photographer said that made a great impression on me.  He had spent 10 years photographing waterfalls, sunsets, barns, flowers, lighthouses, mountains, etc., and then one day realized something was missing and he was bored.   He wasn't being challenged anymore because he had mastered his camera, understood exposure, lighting, composition, etc., and pretty much knew exactly how his images would turn out.  He became tired of producing yet another glorious sunset.  He realized what was missing...the human element.  When photographing people there are always challenges, surprises, and varied outcomes.  When he started doing character studies, his skills improved because he had to go way beyond just the technical aspects of taking a properly exposed picture.  He had to overcome fear and reach out to people.  He had to become a communicator.  He learned to be genuinely interested in the people he photographed, and in turn they, allowed him into their world.  Then he had to compose a picture that not only reflected the personality of his subject, but would tell the viewer a story about the person as well.  (In other words, no sneaking candids with a telephoto lens!)  I don't have anything against landscapes and still life (you can tell that by many of my posts), but I think he is right.  Several years ago I began to force myself to go out of my comfort zone to met interesting people, build rapport by being genuinely interested, and hopefully gain trust so I feel comfortable asking if I could take their picture.  It has been so rewarding and I love the photos I have taken where I feel I've done a good job of capturing a bit of a person's life.  We stopped at this man's little roadside stand in Costa Rica.  He was very proud of his work, and was especially proud that 'someone' had discovered his talent and had some of his pieces in a little art gallery in southern California.  He took out a very worn out and torn newspaper article someone had written about him and was so pleased when we took the time to read it.  He talked about how he became a wood carver and his life style in Costa Rica.  He was proud of how well he spoke English.  He very graciously said I could photograph him.  I was really proud of myself for not just pulling out my camera and taking a quick snapshot.  I kept my wits about me and asked if I could take a picture of him actually carving wood.  He even moved as I directed him, so that I could show his work as part of the background.   Meeting and photographing the interesting people who cross your path will stretch your abilities and skills as a photographer and you will be richly rewarded in the process!
Posted by What Karen Sees at 11:33 PM 5 comments: