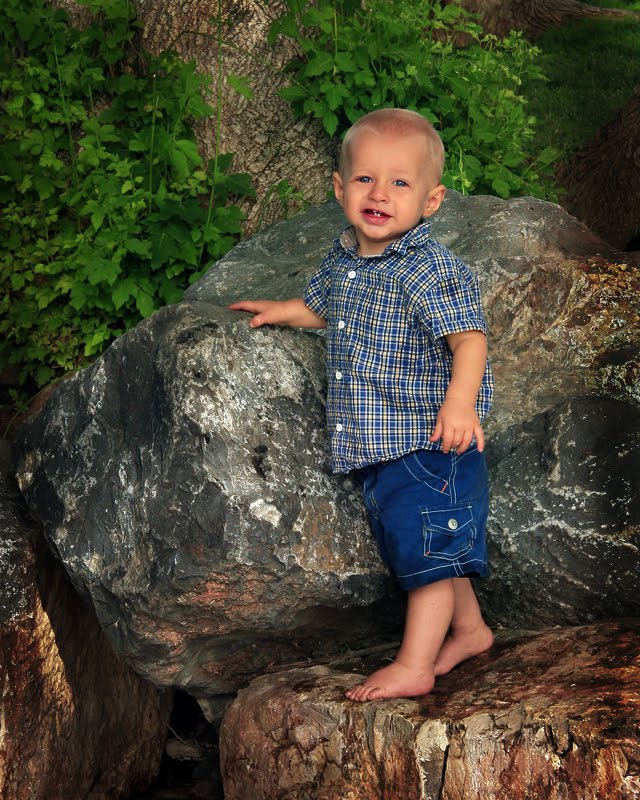 Today our grandson Gavin would have been 3 years old. It's hard to believe almost 2 years have passed since he quietly slipped out of our lives........but never out of our hearts and thoughts.  Every day we are reminded of, talk about, and laugh at the past antics of this adorable little imp who had a personality and spirit as huge and bright as his big blue eyes.  We still look at his fingerprints on the bottom half of the glass on our kitchen door and remember him 'signing' to go outside to play with rocks and sticks, and we still listen to the music of his 'chocolate bunny' and imagine him 'bustin' out his dance moves for us.  Sometimes I see him in the high chair with blueberries smeared from head to toe and a big grin on his face, or rummaging around in the receipt drawer.   We miss him so much, and yet our faith sustains us and we are not without hope and joy, because we know he lives still, and awaits for us beyond the veil.  Happy Birthday Gavin, we love and miss you and will celebrate your birthday with green rice krispie squares and green balloons!!  (I took this photo about a month before he passed away.)
(For those of you who may not know, our grandson passed away shortly after his first birthday.  At the time, he and his parents - my son and daughter-in-law - were living with us while my son finished his last semester of college.  One Sunday Gavin had a slight fever.  Michelle called the doctor twice, being an anxious first time mother, and was reassured when the doctor said he was fine and to give him some Tylenol.  She did so and put him to bed, but when she went back to check on him 20 minutes later he was gone.  He was in the same position as when she laid him down.  The autopsy showed nothing but a healthy, normal 14 month old toddler.  We were all in shock.  This just couldn't happen, but it did.  It has been a hard 2 years.  Jaron and Michelle still live with us, trying to adjust and recover.  Jaron's career plans, and all other plans, for that matter, have been put on hold for now.  But they are doing surprisingly well.  They take care of each other and support each other and still look to the future with their strong faith.  And most importantly, Heavenly Father has filled their empty arms with a second beautiful son to love.  You have seen several pictures of Sawyer here on my blog.  He is as precious as Gavin is to all of us.  For now we don't have all the answers to our questions, but we are content to know that Heavenly Father is real.  He knows us and loves us, and most importantly, we know that all is well because He is in charge!)
Posted by What Karen Sees at 12:46 AM 10 comments: