Tech Talk Tuesday - Making the Sun Your Friend! (plus a bonus!)

A LOVE -HATE Relationship!
If you are an outdoor photographer, you probably have a love-hate relationship with the sun.  If you are a portrait photographer, you know that bright sunlight produces harsh shadows and 'raccoon' eyes on faces, and blown out high lights where you don't want them.  If you are a landscape photographer, you know that bright sunlight produces flat, lifeless images.  As a beginning photographer, you learn to avoid the sun, because more often than not, the pictures taken in the sun look like......well, they look awful, so you avoid the sun shots.
As you grow in experience, however, you learn how to control and tolerate the sun.  You try to shoot on lightly overcast or foggy days, or for landscapes, you try to shoot in the 'golden' hours with the help of polarizing filters, lens shades,  etc.  For portraits, you use scrims to block the sun, or direct its intensity away from your subject, and you look for locations to place your subjects where they are in the shade or at least out of direct sunlight.  The sun is the boss!
And then at some point, you stand up to the sun, and and look it square in the eye....(on second thought, don't do that!).....  and say something like, I'm not going to let you bully me around any more, or force me to stop shooting during most of the daylight hours when I'm awake and want to enjoy my photography hobby!   I'm going to be bold and use you as part of my artistic canvas and I'll be the boss!  This of course means being creative and stretching yourself to think of different compositions where the sun adds to the image rather than detracts.
When I took a portrait class last year, the instructor told us and showed us how he loves the sun and uses it to produce stunning images with spectacular high lights bouncing off the model's hair and clothes, accompanied by soft fill light to produce beautiful lighting on her face.  Ever since then I have looked at sunlight in a different way.  Yes, it is true that the hours around sunrise and sunset produce the most beautiful light possible, but that time is not the 'only show in town.'  Below are two cases where I've used the sun instead of avoiding it, and I think they both work well.  Once in a while it is fun to use sun flare instead of avoiding it, as in the first image, and creating silhouettes with unusual shapes by shooting directly into the sun, often makes for an interesting image.  Another little hint here, although these are not HDR shots, often a stunning HDR image results from placing the sun in your series of exposures.  (See below for a little bonus discussion.) 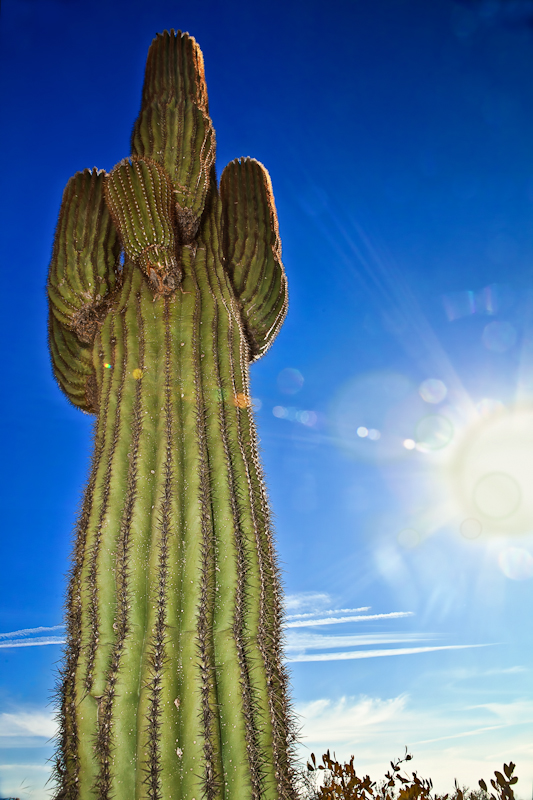 Here's a little bonus discussion for Tech Talk Tuesday.  Remember, I like to compose pictures that show a perspective or view that most people would miss if they were walking by the same scene as I was looking at.  This means you look at your 'subject' from all angles and points of view to find something interesting and different, that catches your attention, and will catch the attention of your viewers.  We all know about getting high and shooting down, or getting low and shooting up, but I didn't realize the concept of shooting low to the max until a few months ago when I accompanied a wedding photographer on a shoot.  Some of the most unusual and beautiful shots she took were from a very low position, angling up.  Now you may think she was sitting on the ground, or even lying on the ground.  Not so.  While standing, she bent over and held her camera at arm's length, an inch away from the ground and pointing it up to take her shots.  When you think about this, you would say, but how could she do this and look through the viewfinder or even at the LCD screen???  Well, she couldn't and didn't.  It takes practice and a ton of shots to get the subject just where she wants in the frame, but she just aimed in the general direction.  Because one doesn't often see photos from ground level, (and I mean ground level), looking almost straight up, many of her shots were fascinating.  (This would be a phun experiment to try on Phriday Phun.)  My point of view on both of these shots is unique from what most people would see, and I think it makes them more interesting.
Posted by What Karen Sees at 9:37 AM 27 comments: