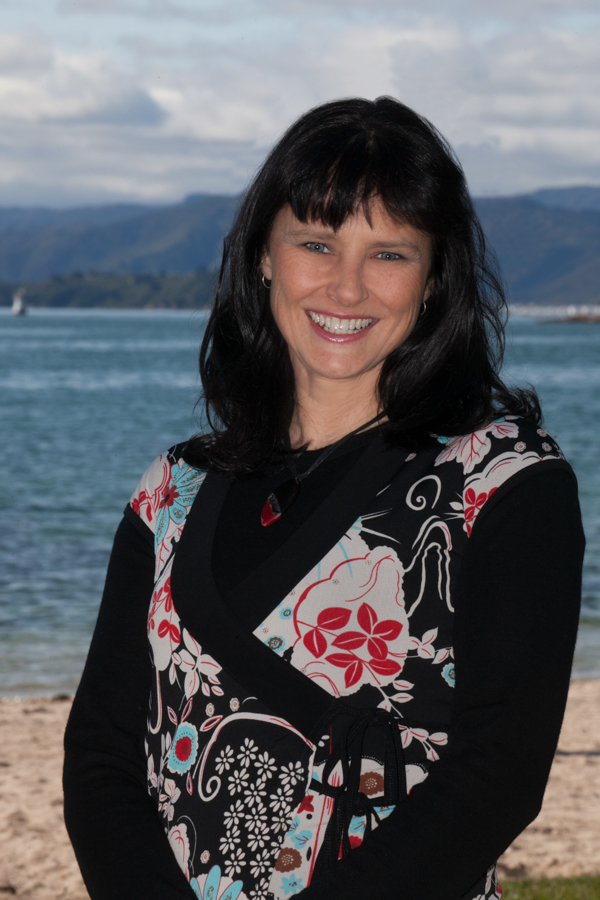 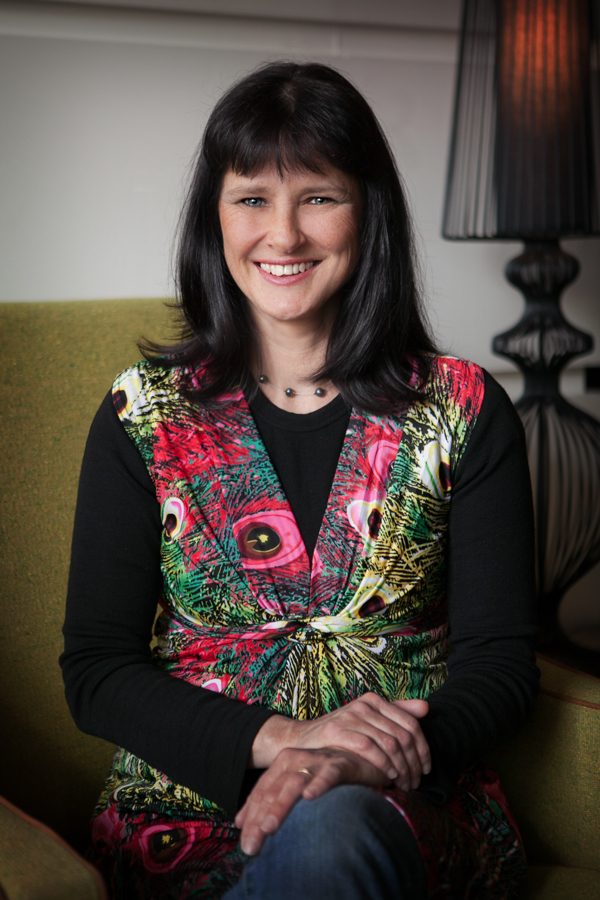 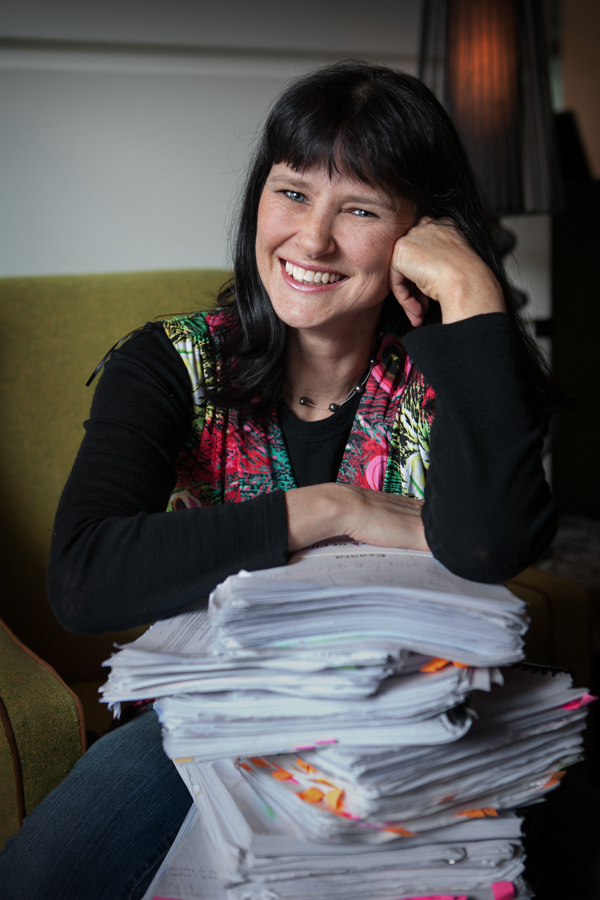 Eileen, our amazing Director of Public Affairs in Wellington.  She is a writer and hopes to soon have her first novel published.  She asked me to take some photos she can use for promotion and book cover.  These are a few of my favorites.
Posted by What Karen Sees at 9:47 AM No comments: 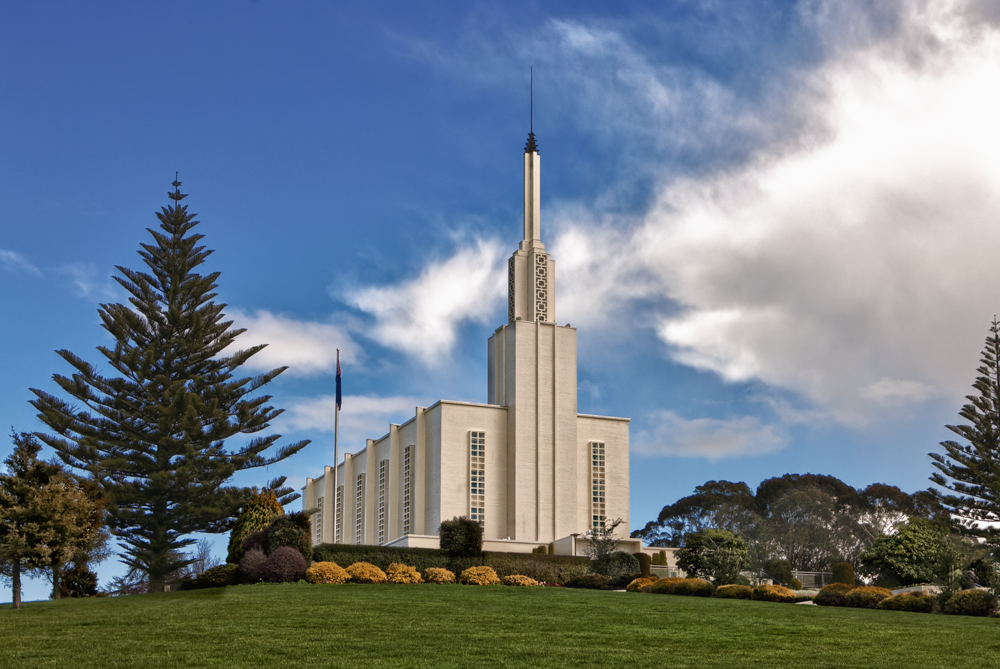 Hamilton, New Zealand Temple
This was our last visit to the temple before returning home. 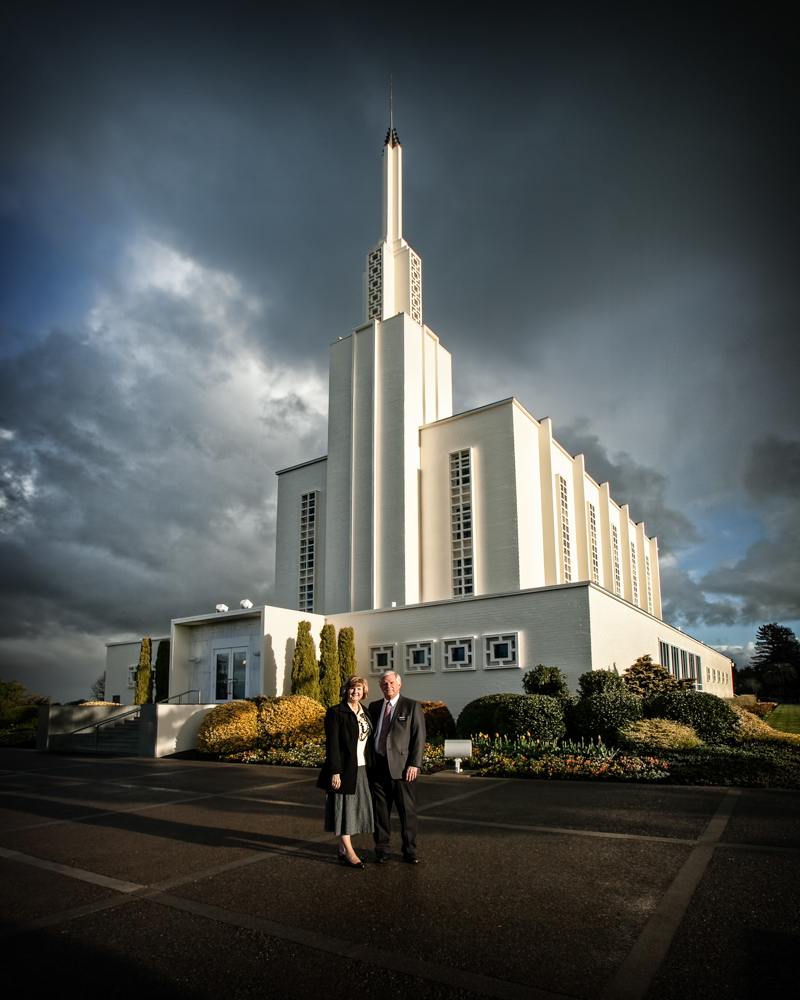 Elder & Sister Larsen
Public Affairs Missionaries for the Church of Jesus Christ of Latter-day Saints
Posted by What Karen Sees at 9:22 AM 1 comment: 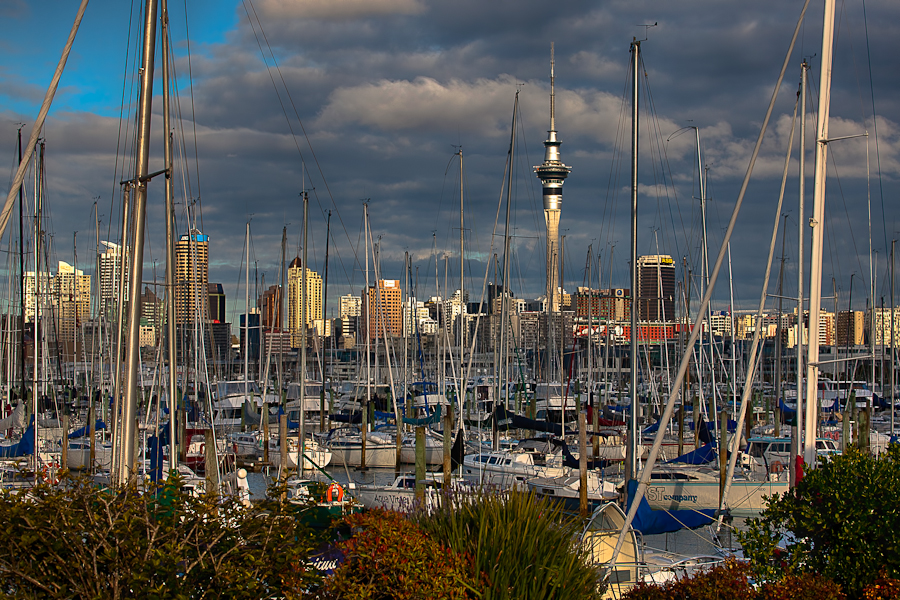 I've mentioned before that Auckland Harbor is often filled with sailboats.  When we cross the Harbor Bridge I always see this scene with the sailboats in dock and the Sky Tower in the background.  Today was a beautiful day, and I took this photo just before the sun set.  I love how the sun is highlighting the city buildings and the Sky Tower.
Posted by What Karen Sees at 4:27 AM 7 comments: 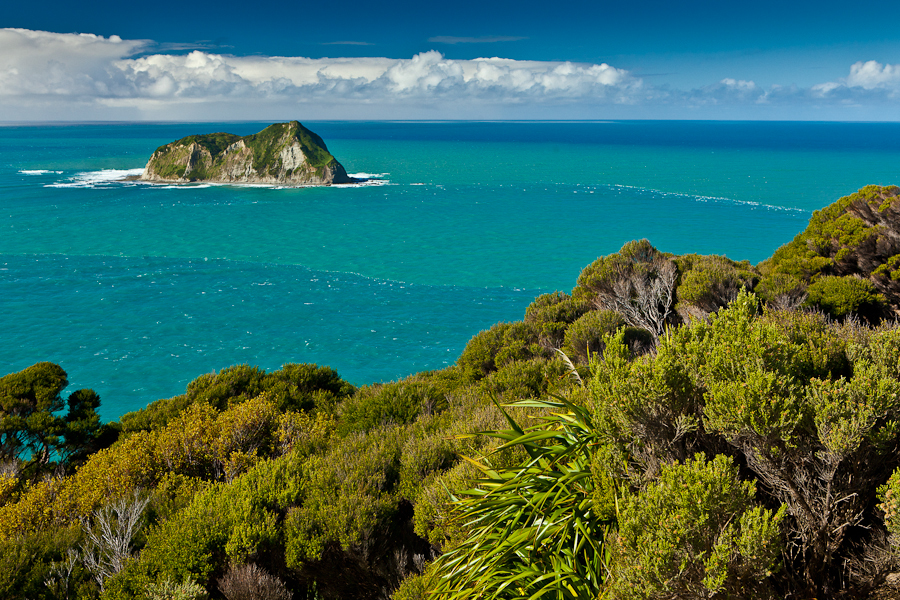 East Cape, New Zealand
East Cape is the easternmost point of the main island of New Zealand.  It is a wild, remote, isolated and beautiful area.  It  has the distinction of being the first mainland place in the world to see the sun each day, according to numerous sources.  I'm not sure what 'mainland place' is referring to, but points in Japan, Fiji and Kiribati also claim that honor.  What I can say, is we were probably the first 2 people in New Zealand to see the sun rise on that day, even though we didn't make it there until some time after sunrise.  Since we saw no other people for miles before we arrived, it is probably safe to assume no one was there before us that day!   So we were standing near the edge of tomorrow!  After walking up the 757 steps we stepped into a small clearing with this glorious view.  I did not saturate or alter the color of the water.  It was just beautiful to see the layers and shades of turquoise stretching to the horizon.  Behind me is a small lighthouse.  Even with a wide angle lens, however, there was not enough room for me to stand and get a decent shot of the entire lighthouse and the ocean in one frame.  The lighthouse used to be on the little island called East Island, or Whangaokeno or Motu o Kaiawa by the local Maori.  Landing on the island and building the lighthouse was a very hazardous job, taking the lives of at least 4 men.  Also, a boat transporting equipment to the island capsized in the treacherous waves.  The lighthouse was completed and the light was first lit on August 9, 1900.  The Maori, however, considered the island sacred and forbidden and said it did not want humans to be there.   No Maori would ever lived there.  The island was continually beset with hardship and tragedy.  Equipment was washed away in heavy rains.  The lightkeeper could not grow a garden or raise cattle to provide for his family because of the poor soil.  Three of his children died.  Ships wrecked on the rugged shoreline causing more deaths.  The island suffered numerous landslides and earthquakes, eventually weakening the structure of the lighthouse.  In 1922 the light was extinguished, and the lighthouse dismantled and moved to the main island where it stands today.
Once the lighthouse was removed and the island was abandoned, all landslides and earthquakes stopped! 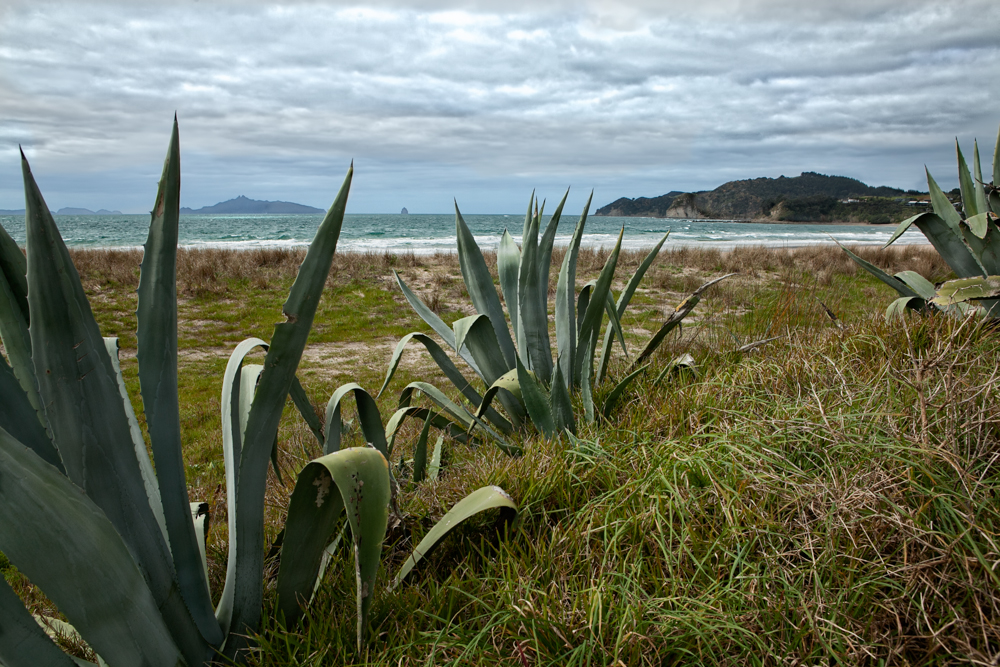 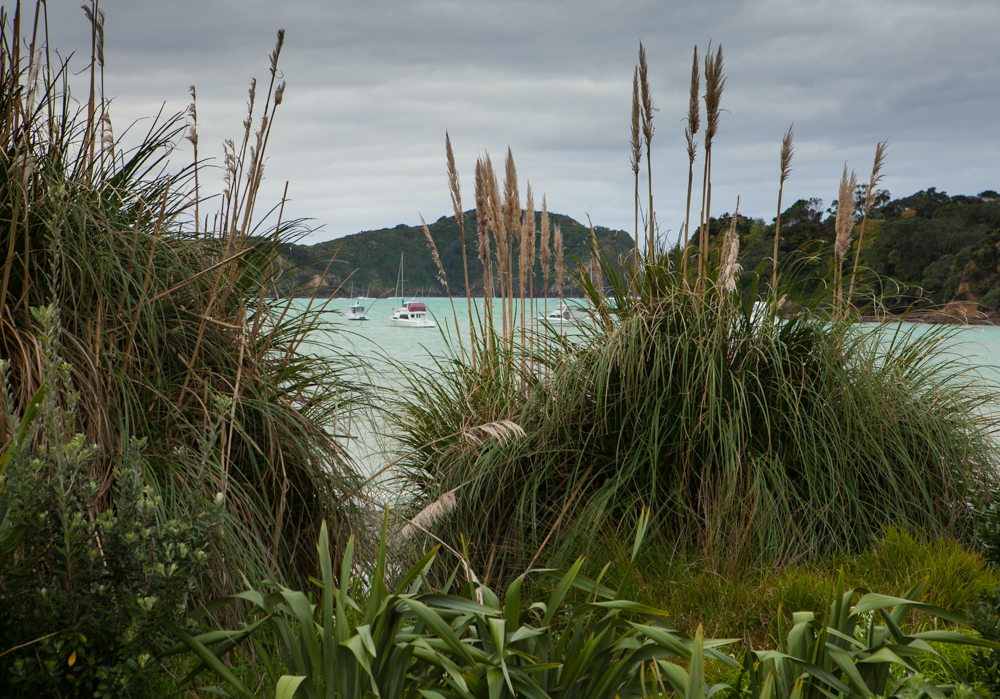 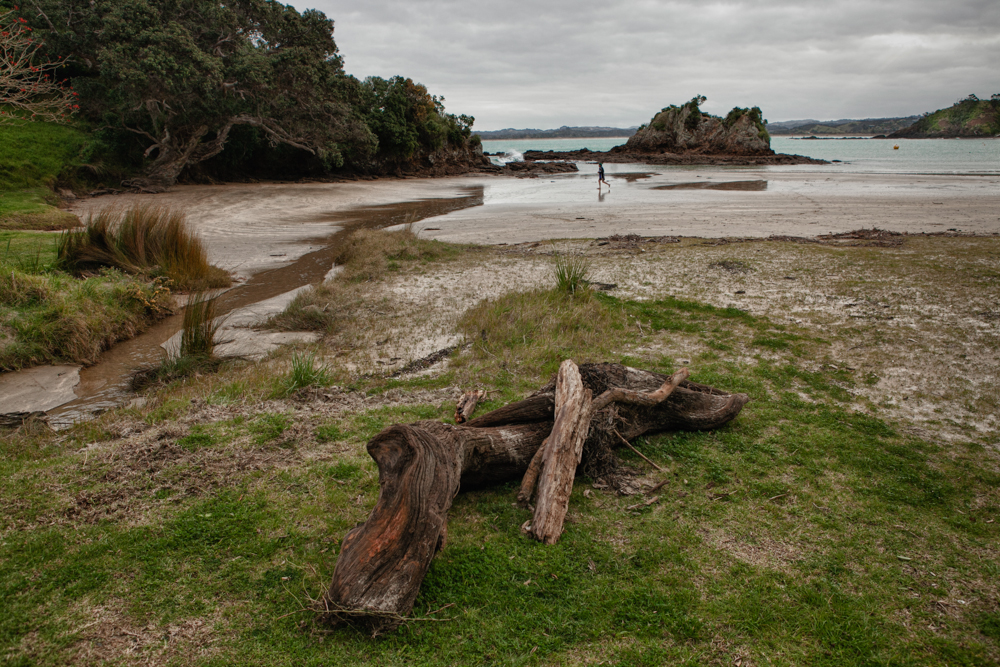 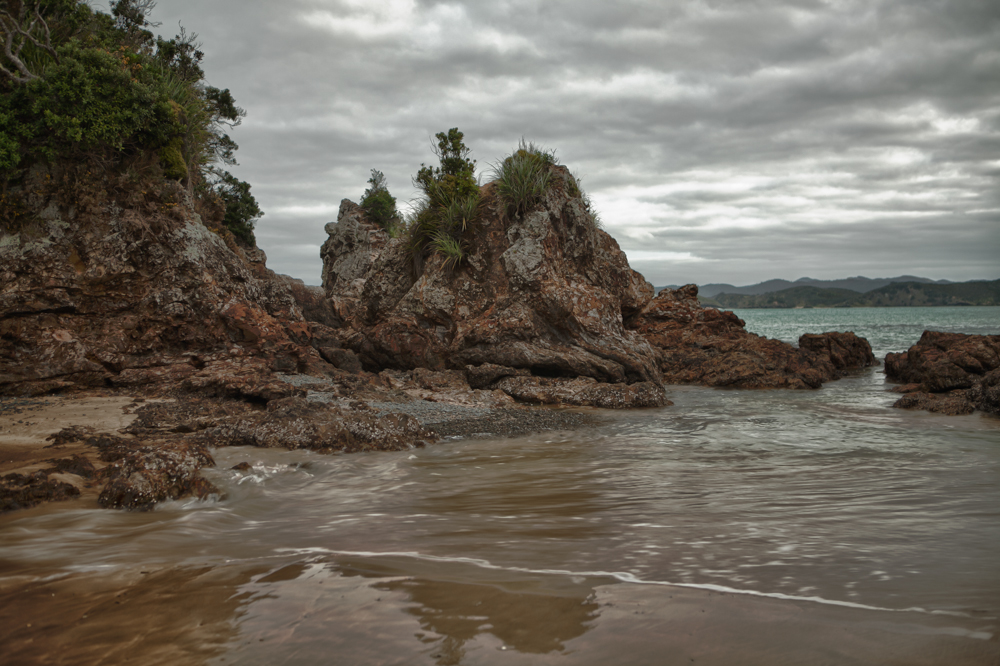 Even on a dull, cloudy day, the beaches of New Zealand are beautiful.
Posted by What Karen Sees at 9:16 AM No comments: 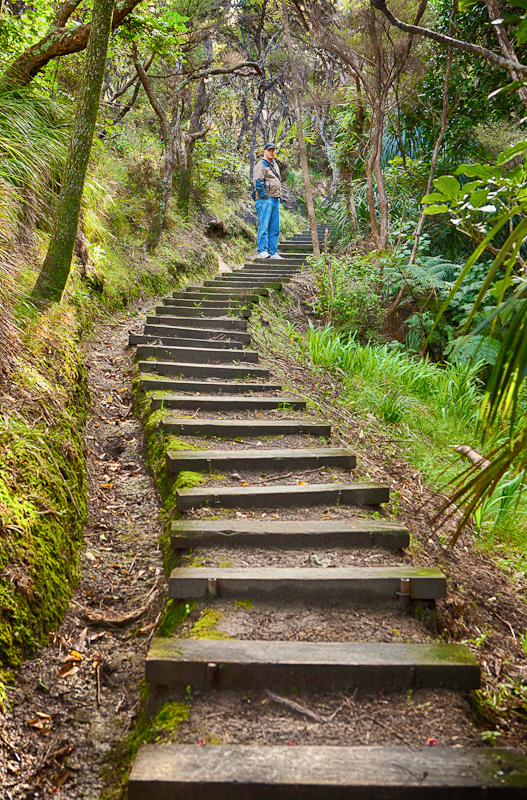 I know because I counted every one of them, and with every step after about 200 I kept asking myself if the climb was worth the effort.  And it was!!!  The next photo will be the view from the top and the end of our journey.
Posted by What Karen Sees at 3:21 PM 4 comments: 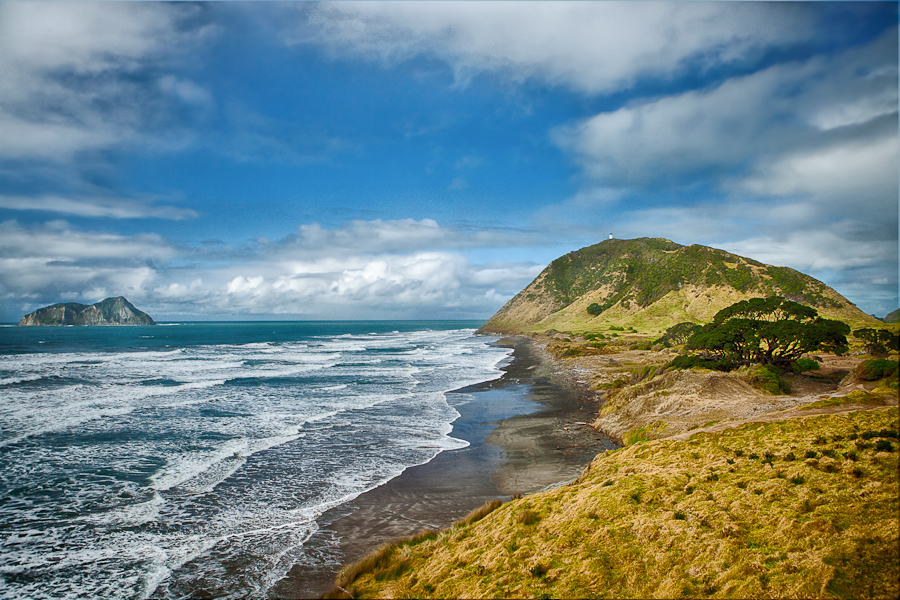 Can you see the tiny lighthouse??  That's where we are heading, the East Cape lighthouse.  Check back to see the beautiful view from this lighthouse and learn why this location has a special significance.
Posted by What Karen Sees at 1:52 AM 7 comments: 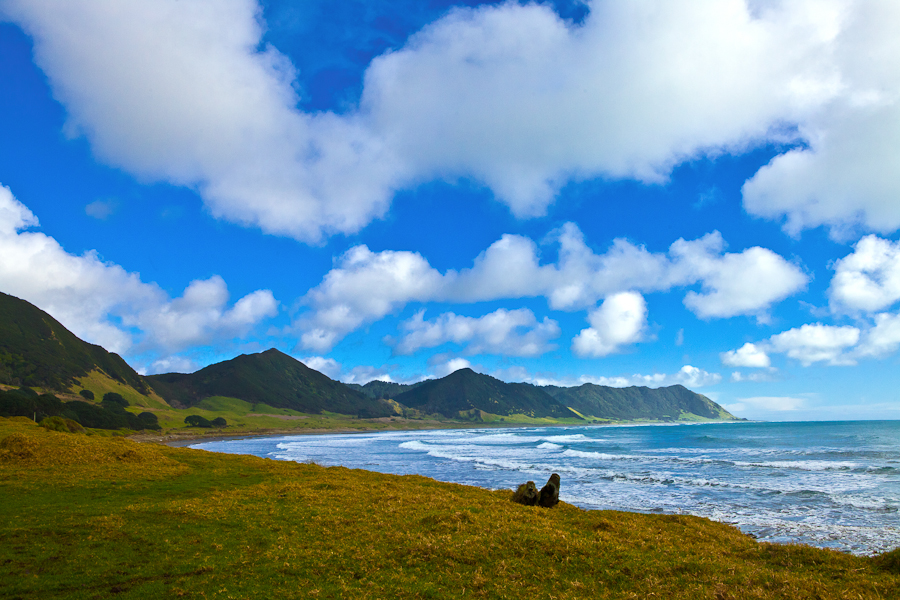 Have I mentioned how amazing the skies are in New Zealand!!
By now we've spent over two hours enjoying this amazing coastline and have missed breakfast and lunch, because there are no services in this remote area.  But, we are getting closer to our destination.  (See several previous posts.)
Posted by What Karen Sees at 3:39 AM 3 comments: 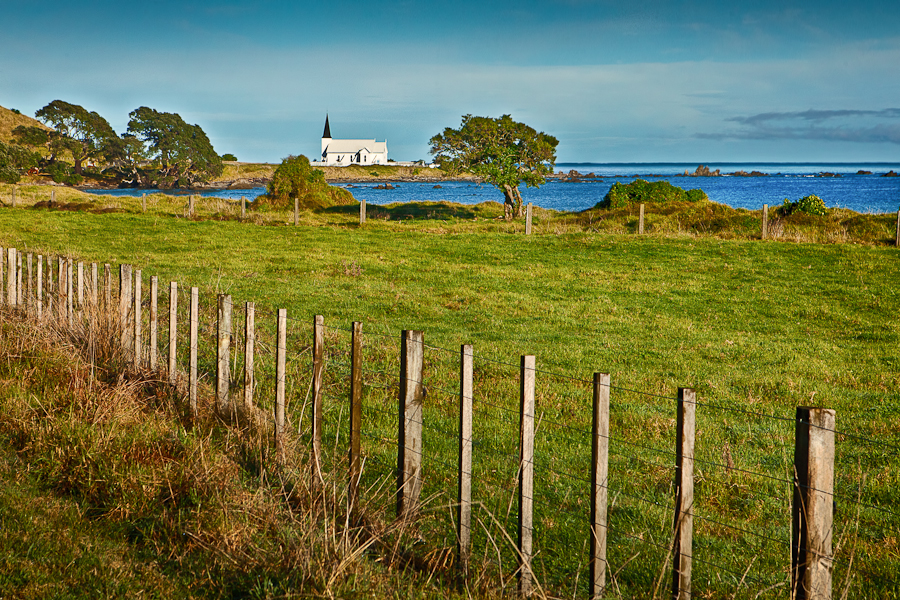 Raukokore Church
Rounding yet another bend on our journey, (see last 3 posts), was yet another picture postcard scene.  This beautiful little Anglican church was a brilliant white reflecting the morning sun.  It is isolated on what looked like a small peninsula and appeared to be sitting right at the water's edge.  Its design looked somewhat out of place and in sharp contrast to the red carvings on the outside of typical Maori maraes, (sacred meeting places), that dot this part of New Zealand.  The church was one of several built in the area by Captain Duncan Sterling, a pakeha, (generally translated to mean a New Zealander not of Maori descent), from hand sawed timber.  Eventually he was married there in 1896 to Mihi Kotukutuku.  Mihi became the chief of Te Whanau-a-Apanui, (her Maori tribe), and she and Duncan had 10 children.  Stirling knew very little Maori, but connections between the Anglican Church and the local Maori people were strengthened through their marriage and Duncan's skill as an architect/builder. 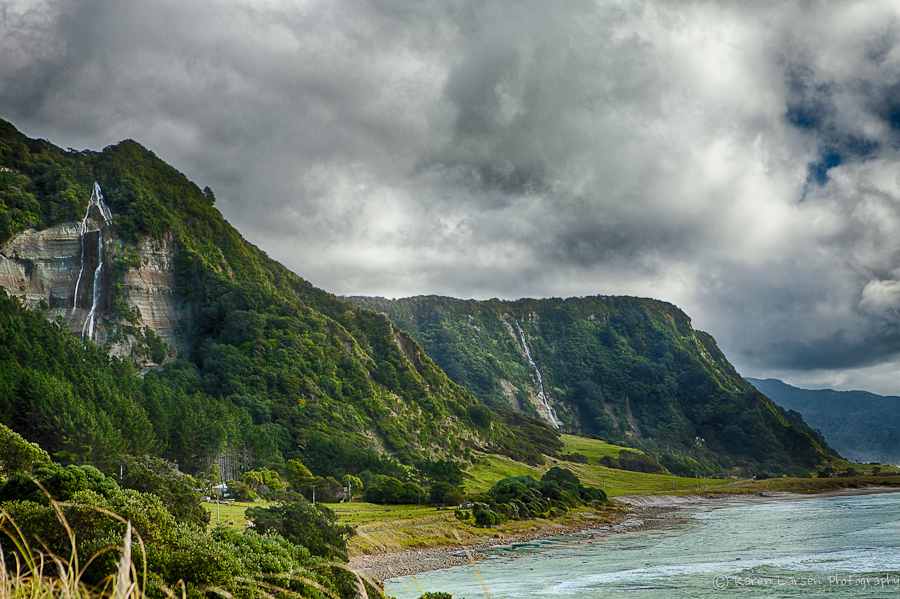 We're getting closer to the edge of tomorrow......no wait, I think it's the edge of yesterday!  I'll have it figured out by the time we get there! (See previous 2 posts)

As we travel farther east, the road gets bumpier, the little Maori villages are few and far between, and we haven't seen a petrol station, or a place to get some breakfast, for miles.  I don't seem to mind, though, as the wild beauty and remoteness of this place seems to sing to my soul.
Posted by What Karen Sees at 10:15 PM 6 comments: 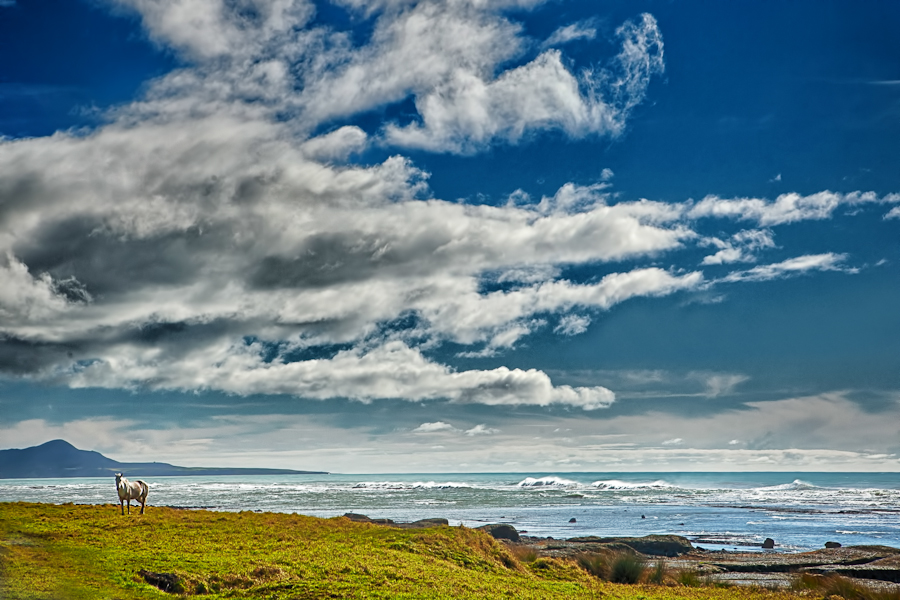 ......with only an occasional wandering horse or cow to watch us pass by.  We're a little bit closer to the 'edge of tomorrow'.
(See previous post)
Posted by What Karen Sees at 3:39 AM 4 comments: 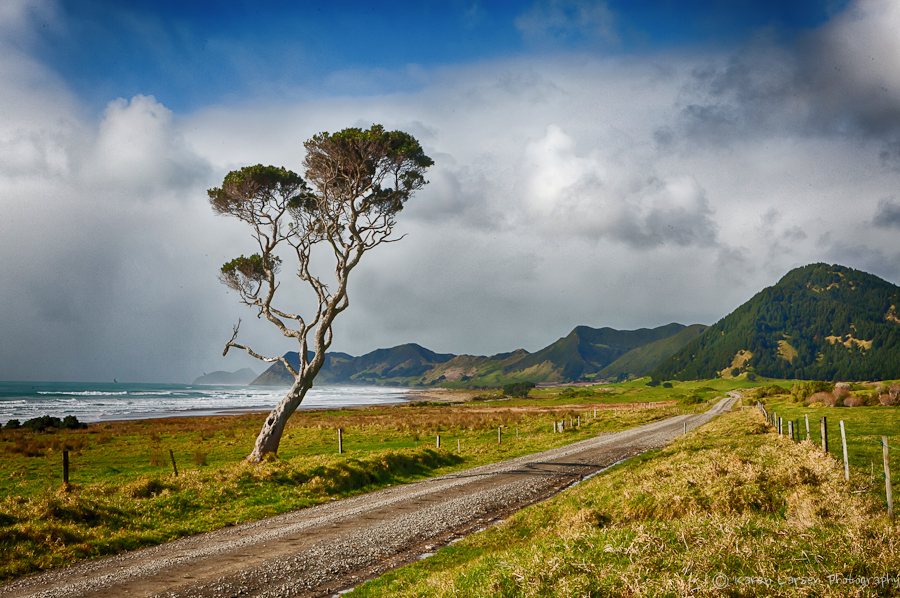 Last weekend we had a little break in our rainy weather, and no assignments so we headed out to explore another beautiful part of the north island of New Zealand.  Although it is winter, the grass is spring green, the mountains are covered with a variety of ever green trees and vegetation, and the weather was a pleasant 60ish degrees.  We traveled down the east coast on an isolated road and saw vista after vista of a wild and unspoiled coastline with turquoise water and rugged cliffs intermixed with beautiful green pastures.
We were on the way to the edge of tomorrow.....literally!  Check my next post to follow our journey and see where we end up!
Posted by What Karen Sees at 9:42 PM 6 comments: 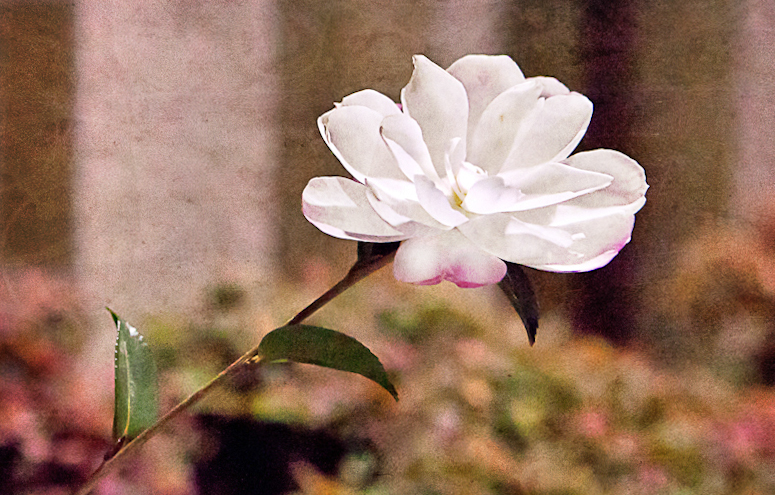 This  blossom adorned the the grounds of the Sydney, Australia temple of The Church of Jesus Christ of Latter-day Saints.  By the time we arrived at the temple, it was dusk, and I worked quickly to take my pictures before dark.  Walking back to the car I noticed this single blossom in front of a slatted fence.  Even though it was dark, the soft white petals stood out from the colorful background and I stopped to photograph it.  This was the type of image to throw caution to the wind and edit to my heart's content.  I had to bump up the exposure, and bring out details in the background.  Then I added some texture and pattern to finish it up.
Posted by What Karen Sees at 10:00 PM 1 comment: 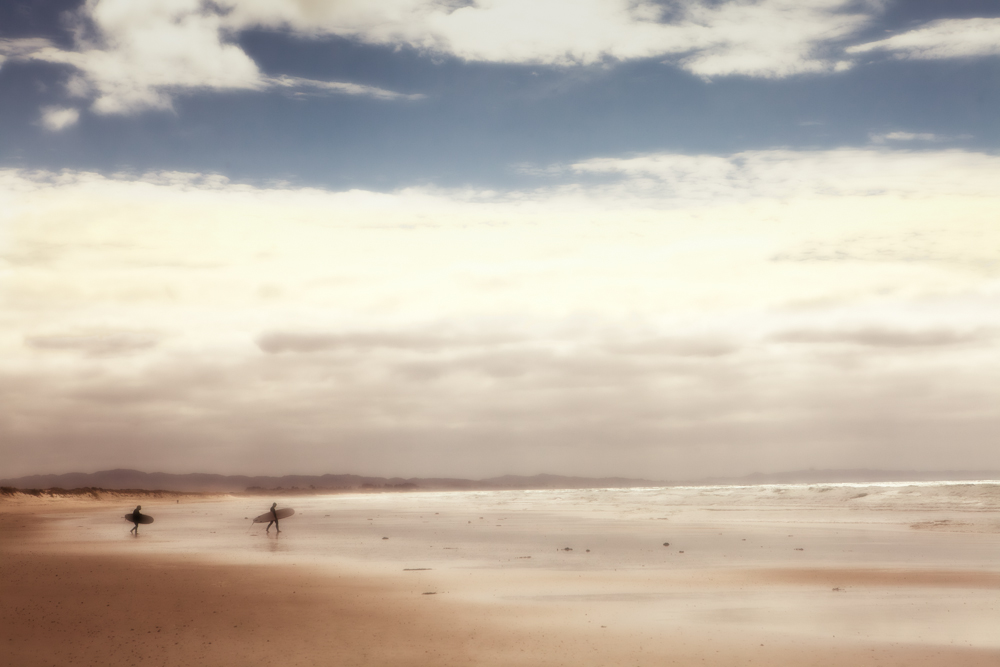 Beach in Whangarei Area
Posted by What Karen Sees at 9:12 AM No comments: