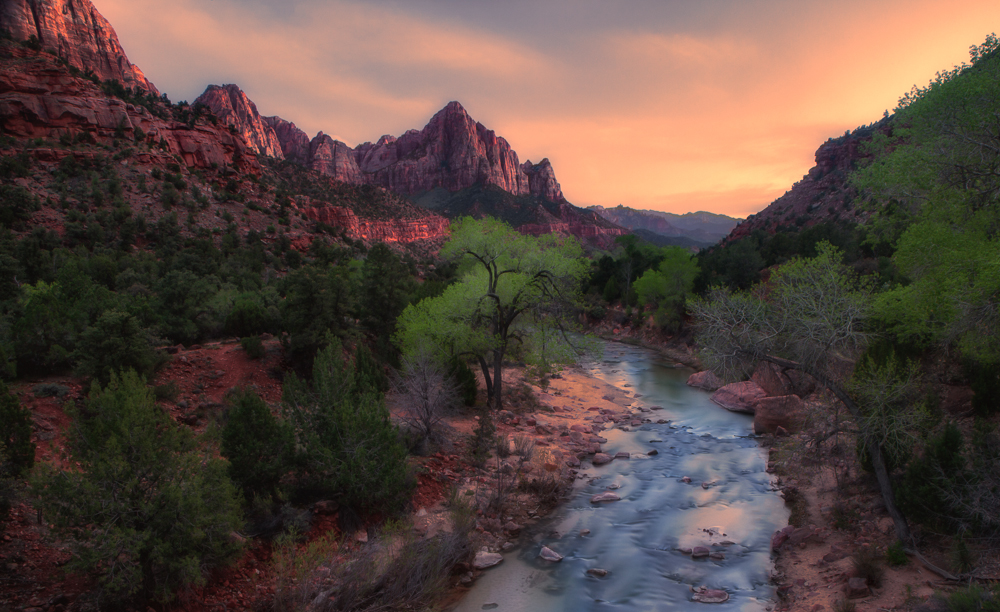 By the time I arrived at this very popular location for landscape photography in Zion National Park, it was dark.  Usually the bridge where this view is seen is packed with photographers and their tripods, as well as a second group waiting for their turn to photograph this iconic scene.  When I arrived, the last photographer was packing up his gear.  It had been a beautiful sunset, and I had missed it.  I sat in my car wondering if I could make it back here while the trees were still adorned with the beautiful, bright green leaves of spring. I didn't know when that would be, so I got out of my car, and decided to shoot a couple of images anyway.  The good news was that I had my pick of anywhere on the bridge to stand as I was the only one there.  The bad news was that it was dark and I couldn't see where I was going or what I was doing.  I knew that to capture any of the remaining light I would have to keep the shutter open a fairly long time, but even so, didn't think I'd get anything worth keeping. I took several shots exposing for different parts of the scene.  I was surprised when I downloaded the images, that by combining parts of each exposure, I was able to bring out much of the detail in the shadows.  I was surprised at how many warm colors were still present even though the sun had set long before.  I often talk about how a camera can't record as much as the human  eye can see.  In this case, the camera saw a lot more than I did!
Posted by What Karen Sees at 4:53 PM 9 comments: