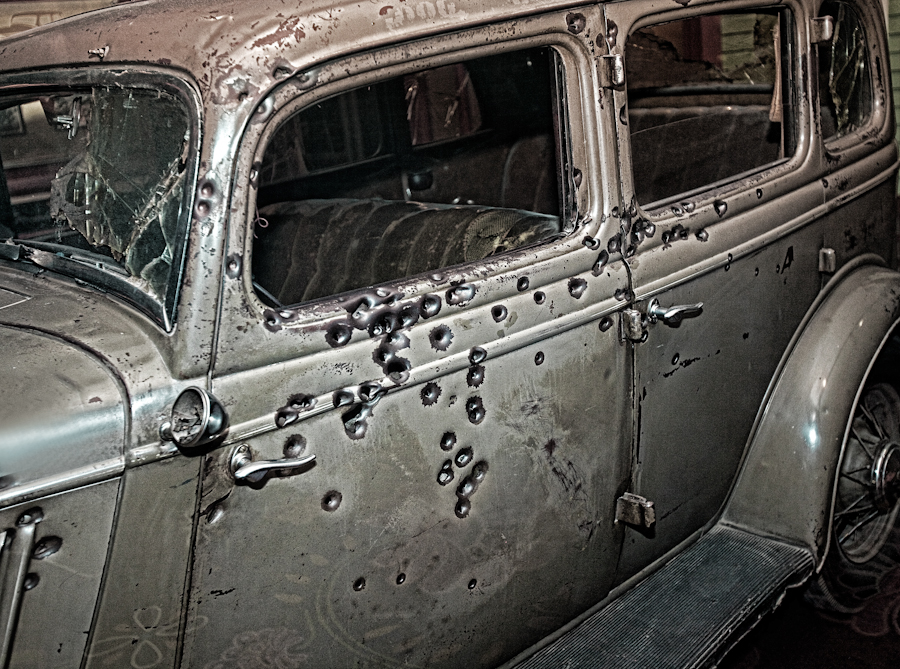 Bonnie and Clyde Meet Their Maker
Last year Jeff and I stopped for the night at a hotel/casino on the border between California and Nevada.  They had Bonnie and Clyde's car on display.  It was difficult to photograph because we were in a dark casino and the car was behind glass.  I couldn't use a flash as it would have reflected off the glass, so I did the best I could by bumping up the ISO and then doing a lot of editing with some HDR to add depth because of all the similar shades of gray.  Also, the faded patterns in the lower part of the image are not on the car.  It is the carpet reflecting off the glass.
Even seeing this car behind glass was a gruesome sight.  I well remember going to the movie of Bonnie and Clyde when it was released in 1967.  This movie had a very unsettling influence on me.  I first thought it was because of all the violence and the idea that a nice woman would voluntarily choose this life.  But that was only part of it.  I soon realized this movie was unique from all the movies and TV shows I had seen thus far in my life.  You see, up until then, good guys wore white, bad guys wore black.  You rooted for the good guys and in the end good most always triumphed over evil, and even if it didn't, you always knew which side was supposed to win.  Then along came Bonnie and Clyde.  It is true they didn't win in the end, but throughout the whole movie I found myself hoping they would outwit and outrun the lawmen who were determined to stop them.  Hollywood made the bad guys appealing and the good guys less so.  Then a few years later came Butch Cassidy and the Sundance Kid.  Now really, how could you not fall in love with the characters played by Paul Neuman and Robert Redford.  Who cared if they were train robbers, you still were rooting for them.  This was my realization that society is divided in their views of what is good versus what is evil, what is right versus what is wrong.  I just always assumed that bad was always wrong and good was always right.  Simplistic me!  Today not only do we condone antisocial and/or illegal activities, we often make cult heroes out of these people.  Remember the flight attendant who opted for an antisocial way of quitting his job...you know, the one who supposedly had been drinking, yelled obscenities over the intercom and then deployed the air shoot?  About a week ago, the news said he has now acquired quite a number of admirers. Huh?