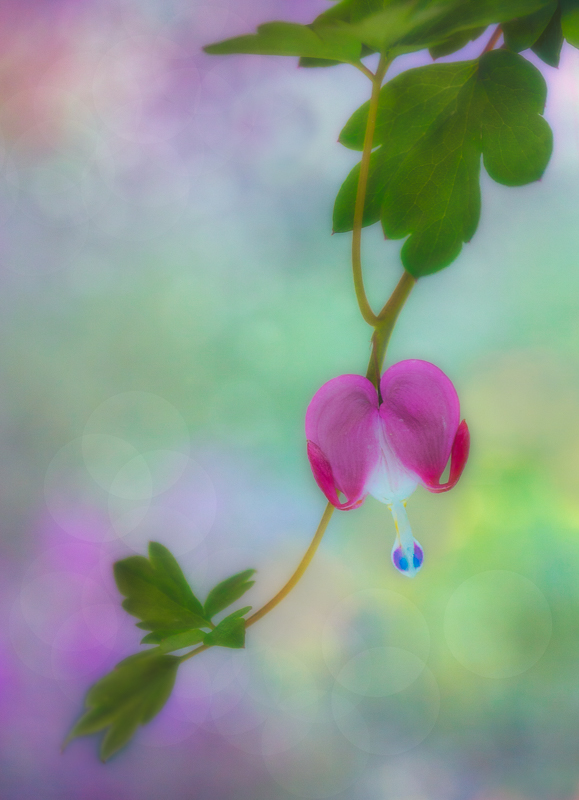 This spring in northern Utah we have had a lot of rainy, windy, blustery weather, and so I've spent as much time as I can manage, enjoying shooting the beautiful cactus blooms in the sunny, warm weather of southern Utah.  When we returned to our northern Utah home, however, I realized that I had neglected and missed many of my favorite spring blooms.  It has been so windy and rainy that I hadn't even been out to see what was blooming in my own yard.  When I finally ventured out, I realized with great disappointment, that one of my favorite spring flowers, my bleeding hearts, were pretty much done.  The lovely arching branches with dainty little rows of hearts were mostly dried up or gone.

This is the time when I used to walk away and photograph another day, but now I force myself to think of other possibilities before I pack up the camera.  So I searched until I found one or two hearts that must have either been late bloomers or were sheltered from the strong winds, because they still looked fresh and intact.  The problem was that they were so hidden by foliage, there was no way I could photography them where they were as a natural, nature shot.

So I immediately switched to 'Plan B'.  I knew this had to be a 'studio portrait' so the first thing I did was cut the little branch that had the best looking little heart and bring it inside.  I put it in a glass of water on my kitchen counter and put a piece of white foam board behind it as a backdrop.  I shot from various angles, some close ups and some including the glass.

After downloading my images to the computer and selecting the one I liked the best, I then had to visualize how I wanted the final image to look.  I decided I wanted a colorful 'fantasy' look, so I knew I would do some major, (but simple and quick), editing.  The first thing I did was to combine the bleeding heart image with another image I took of a flowerbed that I purposefully shot out of focus to use as a soft, dreamy and colorful background.  Then I added a soft focus filter to increase the 'dreamy' look even more.  That's it!  The final result may not be what I originally intended, but I had fun using my imagination to create something unique, and definitely a fantasy!
Posted by What Karen Sees at 11:30 PM 10 comments: