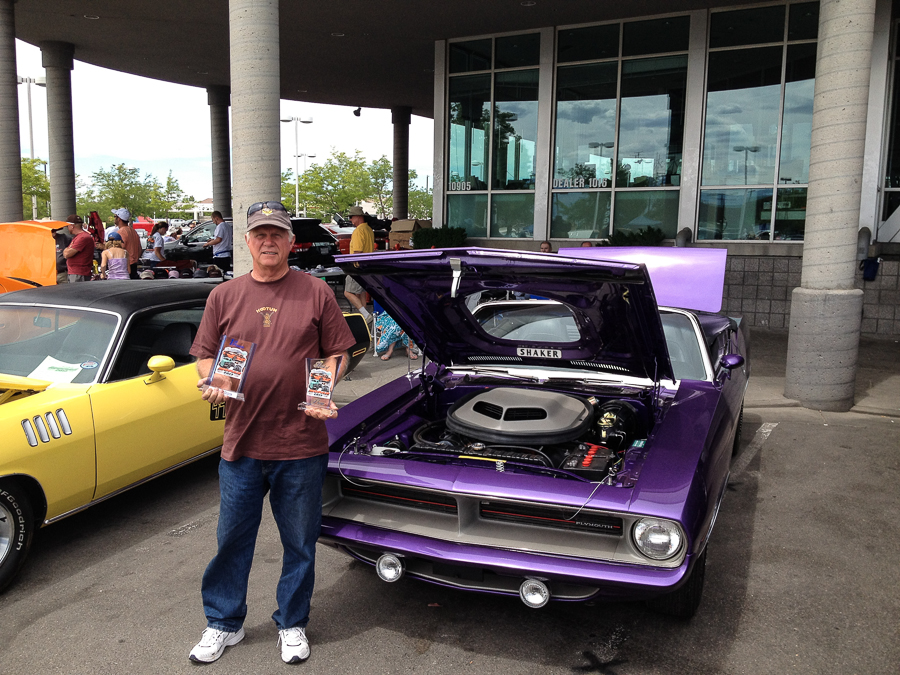 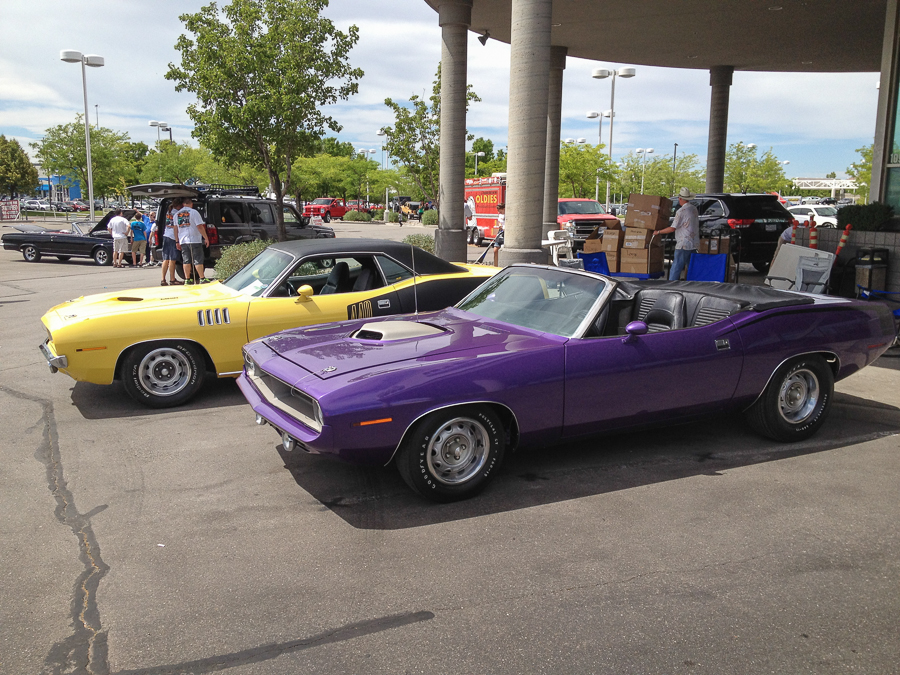 Jeff's Car Story
Ever since I have known Jeff, he has had a fascination with cars.  In college, one of his buddies was rich enough to own a brand new muscle car, and it was fast and loud.  They would cruise the streets and watch heads turn.  I think that was when Jeff determined that one day he would own such a car.

Of course as the years passed, there was no money for such a car, especially with the responsibilities of supporting a family, but he never forgot his love of cars, particularly one type of car.   More years passed and eventually they stopped making muscle cars, so Jeff knew that if he ever had the opportunity, he'd have to restore one.

He came to know everything there is about the type of muscle car he was interested in.  As his knowledge grew, so did his reputation and people who were restoring cars or who wanted to buy cars to restore, started calling him to ask for advice or information.  He began driving down the back roads of small towns where ever we traveled, looking behind barns and garages and in wrecking yards, hoping to find long forgotten treasures on wheels.  Jeff is a 'wheeler and dealer' and began buying, selling and trading car parts that most people didn't want but car buffs did want.  He eventually built up a considerable 'car parts' business that pulled us through during some pretty tight years.

As the years went by, the word spread about his expertise and he has become the local expert on his type of car.  I often joke that you could show him a single bolt or screw and he could tell you exactly where it fit...and that is true!  Car wholesalers from England and Australia found out about him, and for years he acted as a broker and found and shipped vintage American cars oversees.  His 'fame' for his knowledge of these cars, where to find them, how to restore them, where to find the parts, continued to grow.  He is asked every year to judge various car shows in and out of the state.

About the time Jaron became a teenager, there was a little extra money, so Jeff found an old car and they spent many hours restoring it.  What a wonderful bonding experience.  They put his car in several car shows.  Then when Dalin was about ready to drive, Jeff found an old car for him and they spent many hours together restoring it.  Another wonderful bonding experience.  They put this car in several car shows.  While Dalin was on his mission, Jeff was contacted by a motion picture company who was shooting a film in Utah and they wanted to use a specific muscle car and when they asked around town, they were led to Jeff.  The car was in the movie, and Jeff and I went to Hollywood for the premier.  We felt so bad Dalin wasn't here for this.  And continuing the tradition, Jeff has spent equal time with Tyler restoring cars.  I used get irritated that Sunday dinner conversation almost always revolved around car talk.  Now I know this was a great blessing.  There is nothing our sons like better than to be together with their Dad with their heads under the hood of a car, or going to a car show together.  They are all best friends.

But I digress.....Over all these years Jeff has helped his friends and his sons restore cars, but still no car for him.  Then about 10 years ago, through a series of unusual circumstances, Jeff heard of someone who owned Jeff's dream car, a rare and highly sought after car.  The only problem was, he didn't know the person's name.  He only knew the car was stored in a little town in Idaho and the owner lived in Alaska.  Jeff was not going to let that stop him, so one day he took off for Idaho.  He started asking all around town, and by some miracle found the owner who was in town visiting his mother.  And there in a rickety, old garage, covered by a tarp, under a ton of junk, there was.....another piece of junk, at least that's what any normal person would think. But Jeff knew better.  He knew that this was a diamond in the rough, and when restored to it's original beauty, it would be a very expensive car.  The owner was no longer interested in the car, they struck a deal, and driving home with that old car on a trailer, I don't think I've ever seen Jeff so excited. 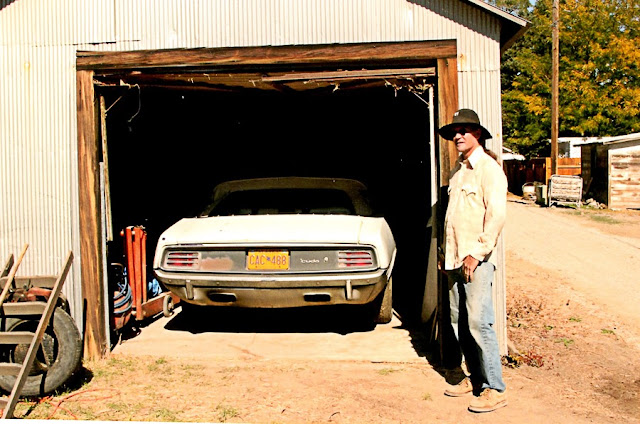 Finding the car and its owner 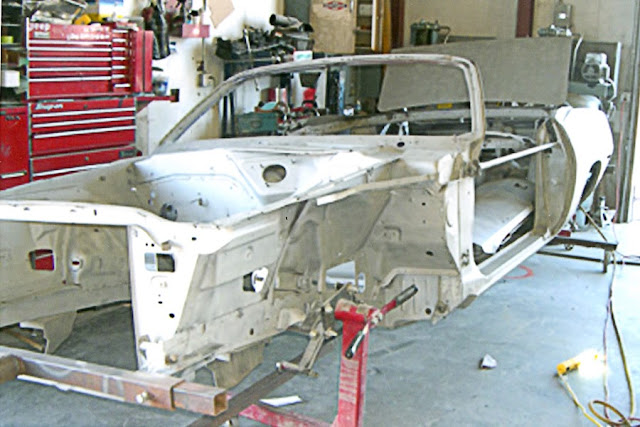 Jeff stripped it down to this.  Is it really a car?
But with family, work, and spare time spent helping the boys restore their cars, Jeff has only worked on his car from time to time, so for many years, it mostly sat in a garage gathering dust.  Now after about 10 years, it is still not complete, although almost.  (I keep teasing him that if he doesn't get it finished soon, he'll be too old to drive it!)   Okay, we are almost to the climax of this story.  One of the local car shows where he has acted as a judge for years, took place several weeks ago.  Jeff decided, finished or not, he was going to pull the car out of the garage, get it washed and polished and finally put it in a car show.

Drum roll please.........he won the two most prestigious awards,  First Place in his Class, and Best Car of the Show.  Congratulations Jeff!
Now the only thing left is to take it out for a cruise and watch heads turn!!!!

(In the above photo, the purple car is Jeff's and the yellow car behind it is Dalin's that was in the movie.)
Posted by What Karen Sees at 8:38 AM 4 comments: