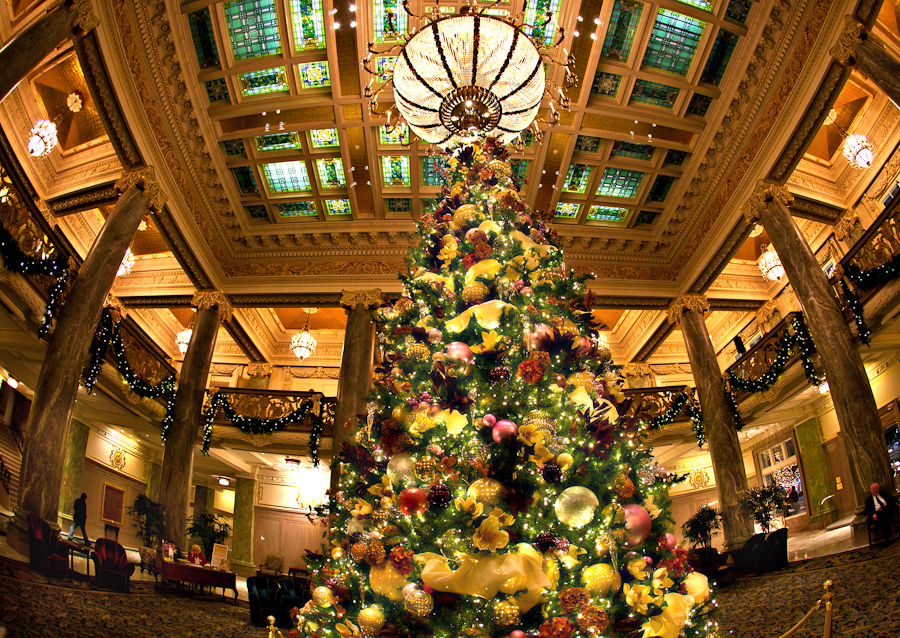 Lobby - Joseph Smith Memorial Building
I was going to post this on next Phun Phriday, but realized it would be after Christmas so decided to do two today.  This beautiful, old building sits on Temple Square.  All the original moldings were made by hand many years ago.  I was having PHUN with my fisheye lens that was able to capture the size of this lobby.  Absolutely stunning and elegant dressed up for the holidays!!!
Posted by What Karen Sees at 11:19 AM 17 comments: 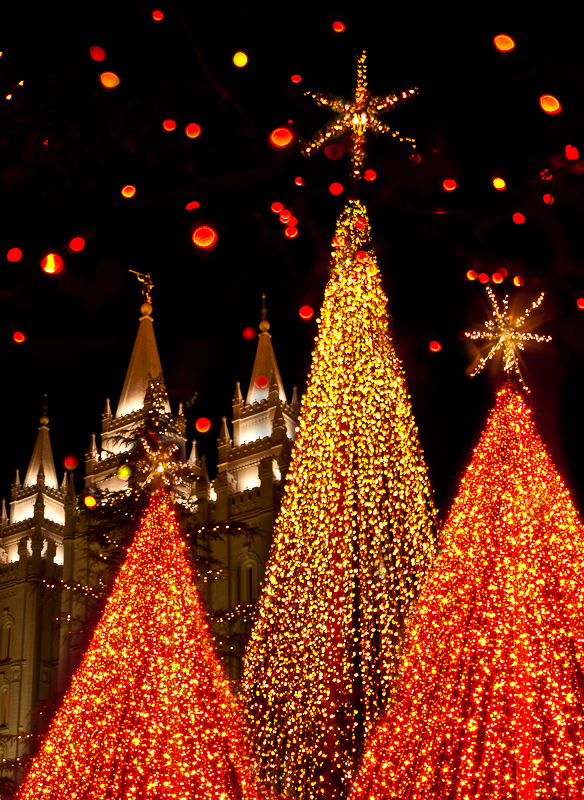 If You Like Christmas Lights..........
THIS IS THE RIGHT PLACE!
Lights everywhere - above in the trees, all around in the trees, trees made of lights, lights on walls, lights on the ground, lights suspended in air, lights on the buildings.  A beautiful sight indeed!
What was PHUN:  In addition to the lights, the laughter of children, couples in love, families enjoying a night together, the "oohs" and "ahhs" of people here for the first time, and visiting with my photographer friends.
What was NOT PHUN:  Even though I looked like the Pillsbury Dough Boy with so many layers of clothes on, my fingers and toes were totally numb!  I really had a hard time fiddling with the dials on my camera.  A funny incident - I had been walking around by myself for awhile when a couple asked me to take a picture of them with their camera.  When I started to speak to say of course I would, I realized my face and mouth were somewhat frozen, too, (kind of like when you take a big mouthful of ice cream), because when I talked I slurred my words.  Even though I tried to explain, I'm sure they thought I'd been drinking!  The other NOT PHUN thing was that I totally missed Scott and Chad even though I looked for them all night.  I was kicking myself for not getting a cell number, but when I got home I saw that Scott had left me an email with a number to call, and told me he'd be wearing a Santa hat.  Darn, I really wanted to see Scott in a Santa hat!!!  I did get a text from Lloyd saying he couldn't make it at the last minute.  Well, maybe next time, guys!
P.S.  I'll post my favorite image from this outing on Sunday.  This one was just for Phun as I combined several images to depict the feeling of lights everywhere.
Posted by What Karen Sees at 9:13 AM 10 comments: