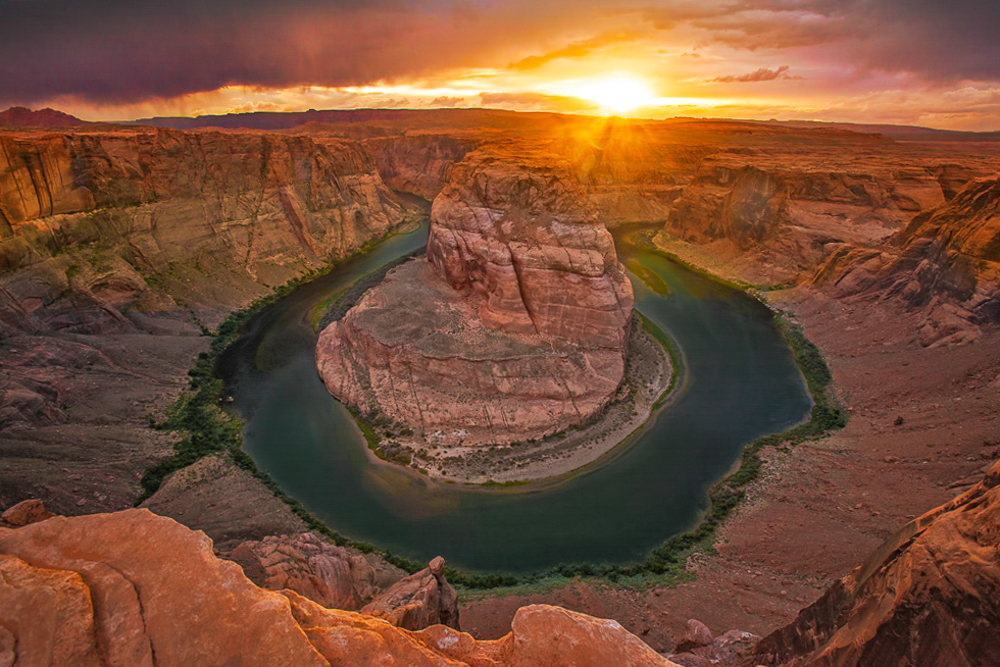 Horseshoe Bend, AZ
(This is probably one of the top 10 photographed landscapes in the United States)

First you have to read the story behind this photo to understand my 'Tech Talk' comments at the end:

Recently Jeff and I spent 3 glorious days riding our RZRs in Moab with a group of friends.  Before returning home, I persuaded Jeff to take one more day to go to Arches National Park and Monument Valley.  This is a landscape photographer's dream drive.  We stopped many times along the way so I could take photos, but as the day wore on I felt rushed because there were so many pictures to take and so little time.  The day was quickly slipping away.

The last stop I wanted to make was at Horseshoe Bend, just across the border from Utah in Arizona.  I've traveled past the turnoff to this landmark several times, but have never stopped to photograph this iconic scene where the Colorado River has carved a spectacular 'U' into the deep canyon walls.  Well, today was going to be the day!

At this point, however, it was late afternoon, and I knew we'd be racing the clock to get there before the sun went down.  It had been storming off and on all day, and thus far, I was thrilled with the weather because brooding, stormy skies always make landscape photos more dramatic.  (I'll post some of those shots in the future).   But now the storm was threatening to get serious.  It was thundering and I could see lightning in the distance, exactly in the direction we were headed.

We pulled into the parking lot/trail head about 20 minutes before the sun would disappear, along with my photo opportunities.   I was hoping I could walk a couple of yards to the viewpoint, but that was not the case.  It was a 3/4 mile hike.  I was really nervous about leaving the protection of the car because I could see lightning and rain all around us.  We decided to go for it anyway and made the hike in record time, trying to ignore the howling wind that was announcing the impending storm  heading our way.  All the while I'm thinking what a waste of time this was, because the sun just above the horizon, was hiding behind thick clouds, making the landscape dull and gloomy.  The red cliffs were drab and I knew the water deep in the canyon would look black.

Just at the time we finally arrived at this viewpoint, however, an amazing thing happened.  The sun broke out of the clouds just barely above the horizon, bathing the landscape in brilliant, golden sunset light, and creating this gorgeous scene!  I knew I only had a few short minutes before it would disappear below the horizon.  Even though I was out of breath from rushing to get there before the advancing storm hit and the sun disappeared, I frantically searched for a vantage point to take my photos, navigating between the 50 or so other people who were doing the same thing.  I had no time to set up my tripod.  I didn't even have time to think about which lens would be best, or even what settings to use, but LUCKILY, I had done all this beforehand.  When I found my spot I hurriedly inched as close to the edge as I dared, but when I looked through the viewfinder of my camera, it made me dizzy, so I yelled at Jeff to hold onto the back of my jacket so I wouldn't lose my balance.  I tried to steady my camera as best as I could in the wind that became worse as I got closer to the edge, and then I rapidly fired off a very few shots.  That was it!   Just that fast the sun was gone and so was this beautiful scene.

With the sunlight gone, it quickly became dark and threatening, as the rain and lightning were very close.  We left as fast as we could to get back to our car.  Now the 3/4 mile hike was uphill so we weren't moving nearly as fast.  (I was rudely reminded that I am now an old, out of shape person, as we watched so many younger people run past us without even breathing hard!)  About 30 minutes later, when we were just a few yards from the car, it started to rain.  I tucked my camera under my jacket and we made the final dash before the torrent hit.  With only having a couple of minutes of shooting time, I felt very LUCKY to come away with the few shots I took even though I had no confidence that they would be any good!

Was I really LUCKY to get those shots?  What part does LUCK play in getting great shots!
Here are my 'Tech Talk' thoughts for today:

We can learn all the 'rules' of photography.  We can take classes to learn how to be better photographers.  We can find the most interesting locations or subjects to shoot.  We can work to develop our artistic talents.  And so on.  But sometimes it just comes down to GOOD LUCK as to whether we get a great shot or not!  I didn't have much hope that my photos would be any good because of the poor weather conditions at first, and then my frantic attempt at a few shots, so I was surprised when I saw this result.  I realized that for the very few minutes when it all came together at this place, I had the GOOD LUCK to be there!  And here's another thought.  I bet almost every other person standing at that view point along with me at that moment, was LUCKY too, and got a beautiful photo as well, whether they used a $10,000 dollar camera or a smart phone.......BECAUSE IT WAS MORE ABOUT THE PLACE, THE TIME, THE WEATHER, AND THE BEAUTIFUL LIGHTING, THAN IT WAS ABOUT THE EQUIPMENT OR EXPERTISE.
(Note:  I'm sure some photos were better than others, but I bet everyone ended up with a decent photo assuming their camera or smart phone was working correctly and pointed in the right direction!)

Some would think that 'BEING LUCKY'  implies we have no control over whether we have good photo karma or not.  But I maintain there are ways we can tip the odds of being LUCKY in our favor.  I think that often GOOD LUCK goes hand in hand with PREPARATION AND QUANTITY.  The more often we are prepared for the unexpected by keeping our cameras with us, the more we look for great photo ops on our daily travels and the more photos we take each week, might determine how often we are LUCKY enough to be in the right place at just the right time to take an awesome photo!

Not only will I enjoy this beautiful scene for years to come, I'll remember how LUCKY I was to get it.