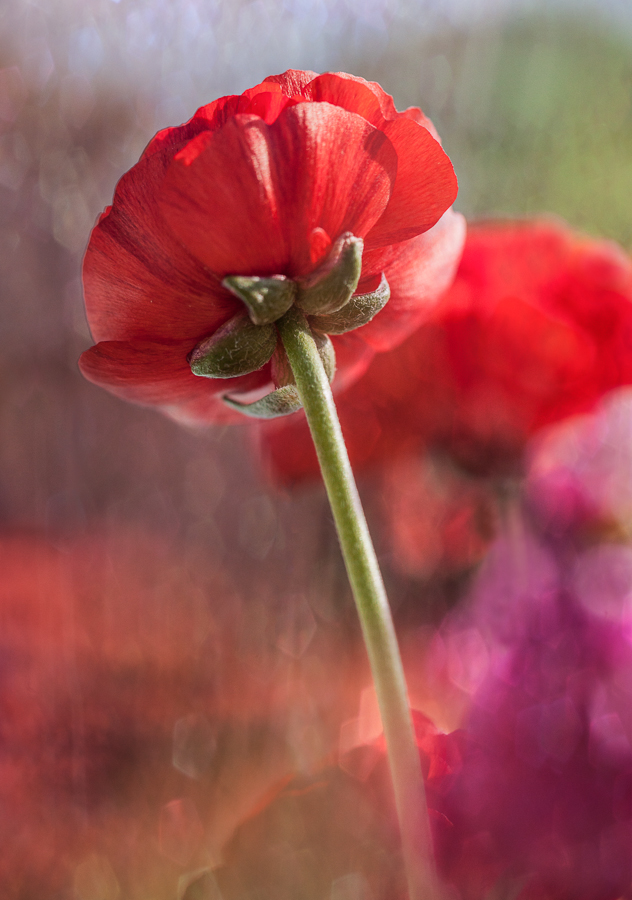 Misty Watercolor Memories
(This is what Karen Saw) 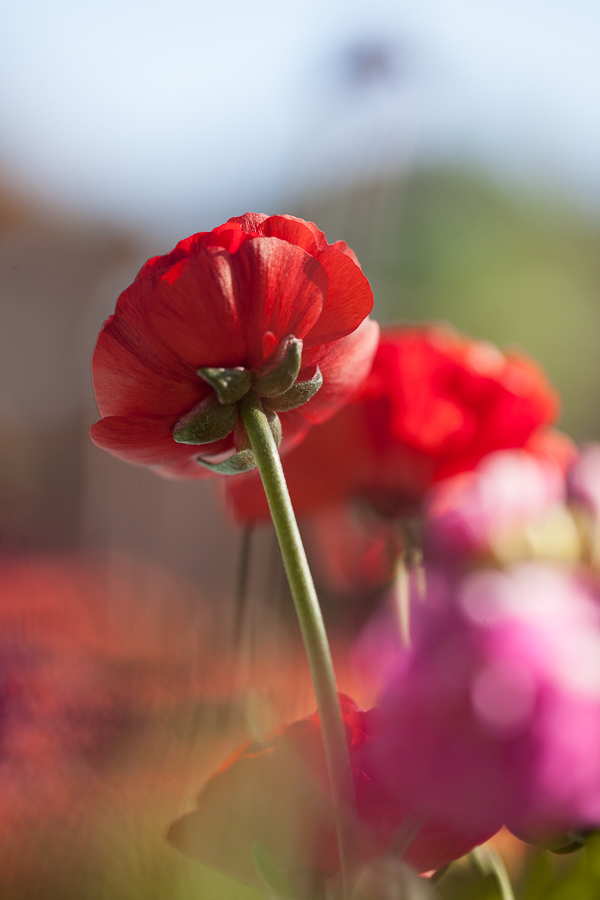 (This is what the camera saw)
Posted by What Karen Sees at 8:23 AM 9 comments: 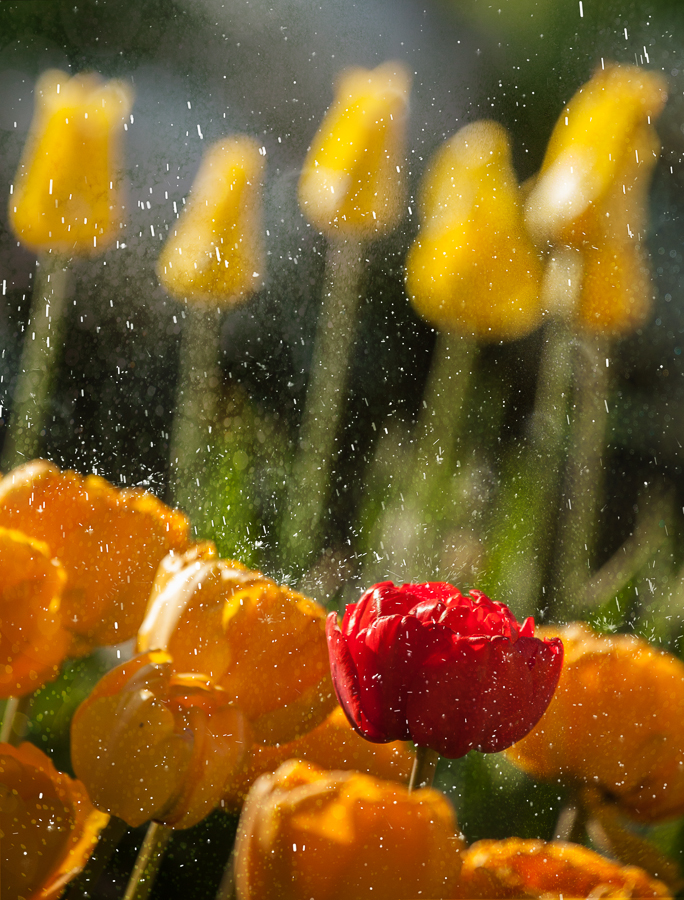 In a Soft Light 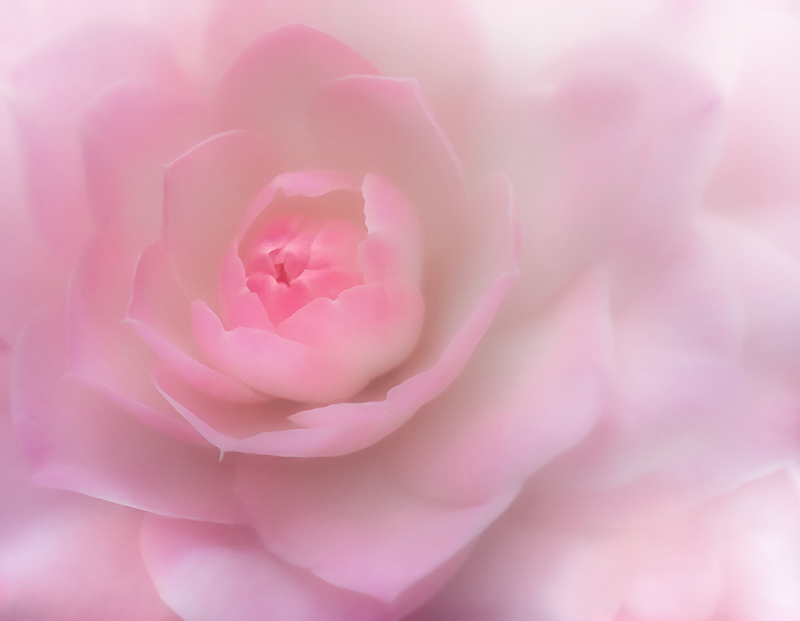 In a Soft Light
Posted by What Karen Sees at 9:42 PM 7 comments: 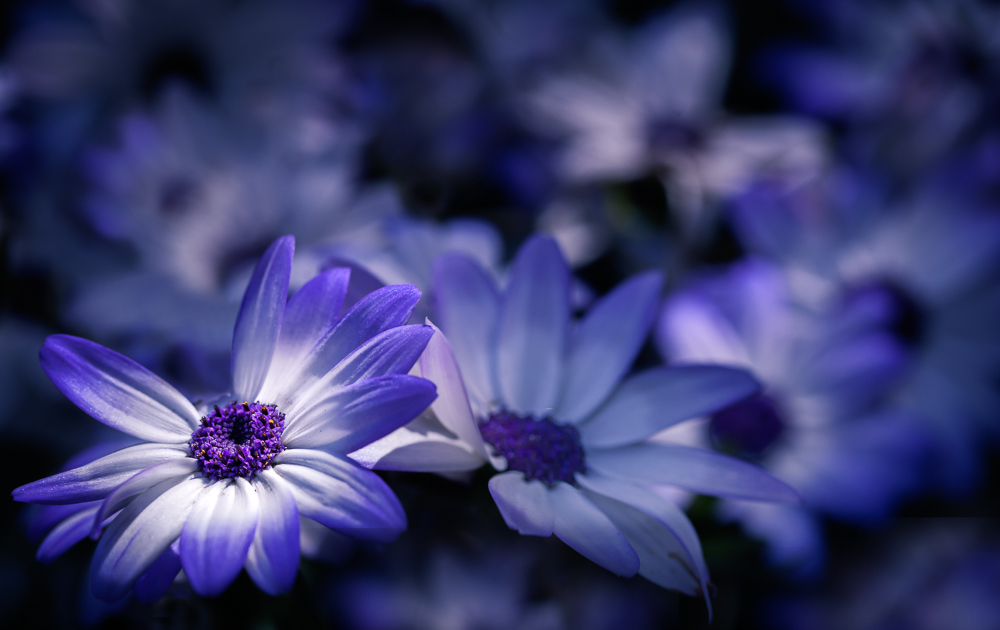 Sometimes an image is more interesting when the subject is not perfect or it is different than what you'd expect to see,  like a repetitive pattern that is broken.  Imagine a row of blue beach umbrellas, perfectly spaced and lined up along a beautiful beach.  That would be lovely, but it would be more interesting if just one umbrella, maybe a bright yellow one, broke the pattern and stood out in the middle of the blue ones.

I think that most photographers would be more inclined to take a picture of a 'perfect' flower rather than one that was damaged or had some of the petals missing.   In the above image, I think the flower in focus, the main subject, is more interesting with just one petal missing.  (No I didn't pull it off before taking this shot, but I might have if I'd thought of it!!)  Does it bother you that the flower, as the main subject, is not perfect? 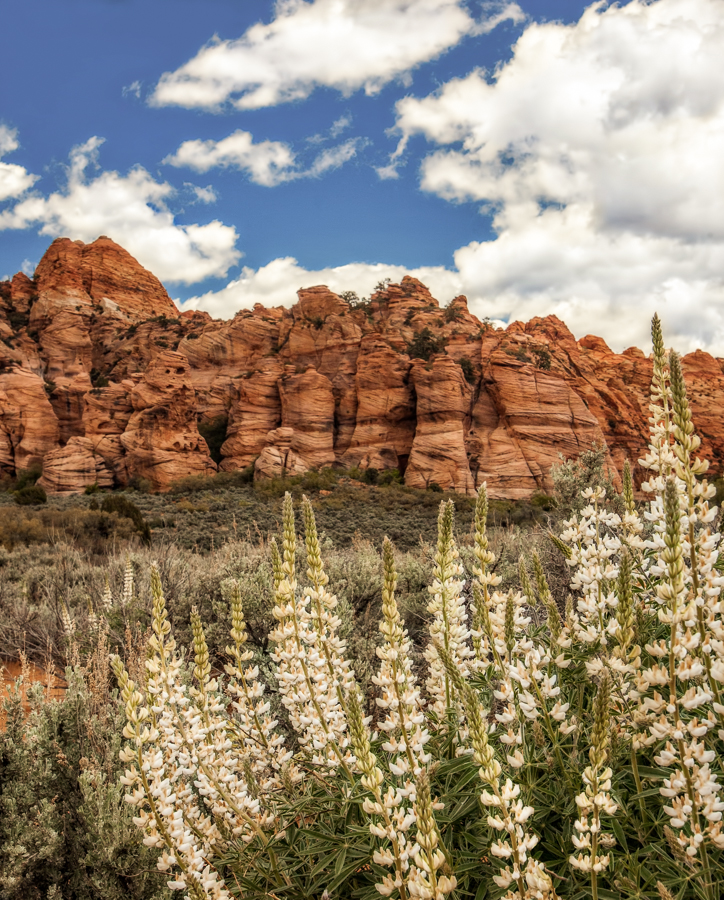 Lovely wild flowers, craggy red rock cliffs, and a beautiful sky.......doesn't get much better that this for a landscape photographer!
Posted by What Karen Sees at 6:11 PM 6 comments:

A Peek at Zion 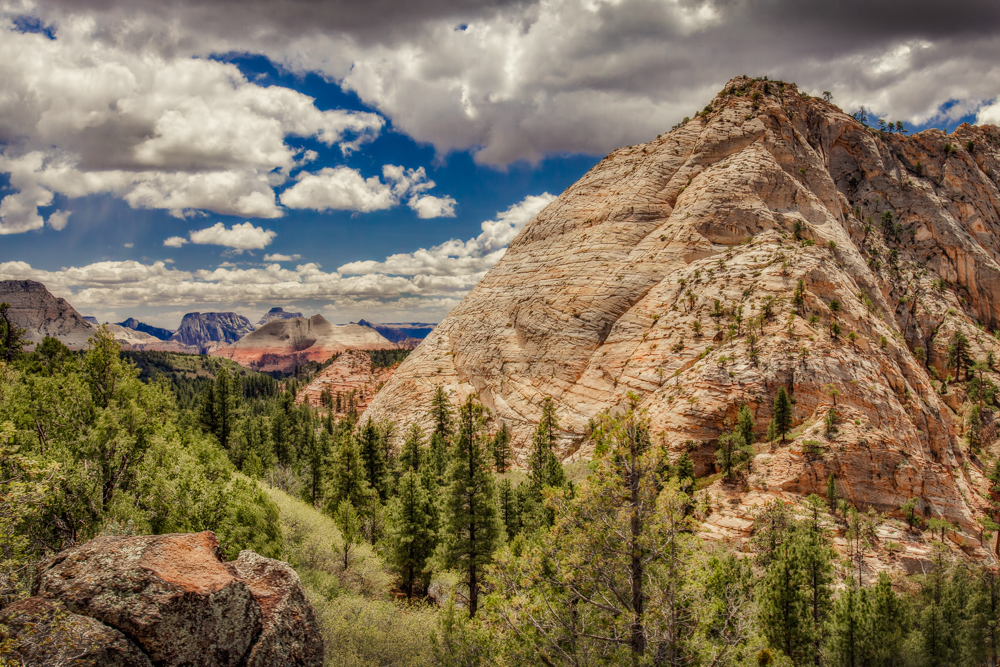 Actually I don't know if I was in the park or not.  This was taken from a road outside of the park heading to Kolob Reservoir.  It was a beautiful drive and starts at the main road that goes through the tiny town of Rockville, just a few miles from the main entrance into the park.  There were signs along the way that said I was in the park, then out of the park, then in again so I don't know if I was in or out where I was standing to take this photo.  I am positive, however, that the rock formations in the background are in the park.
Posted by What Karen Sees at 8:40 AM 6 comments:

When a Photo Becomes the Canvas 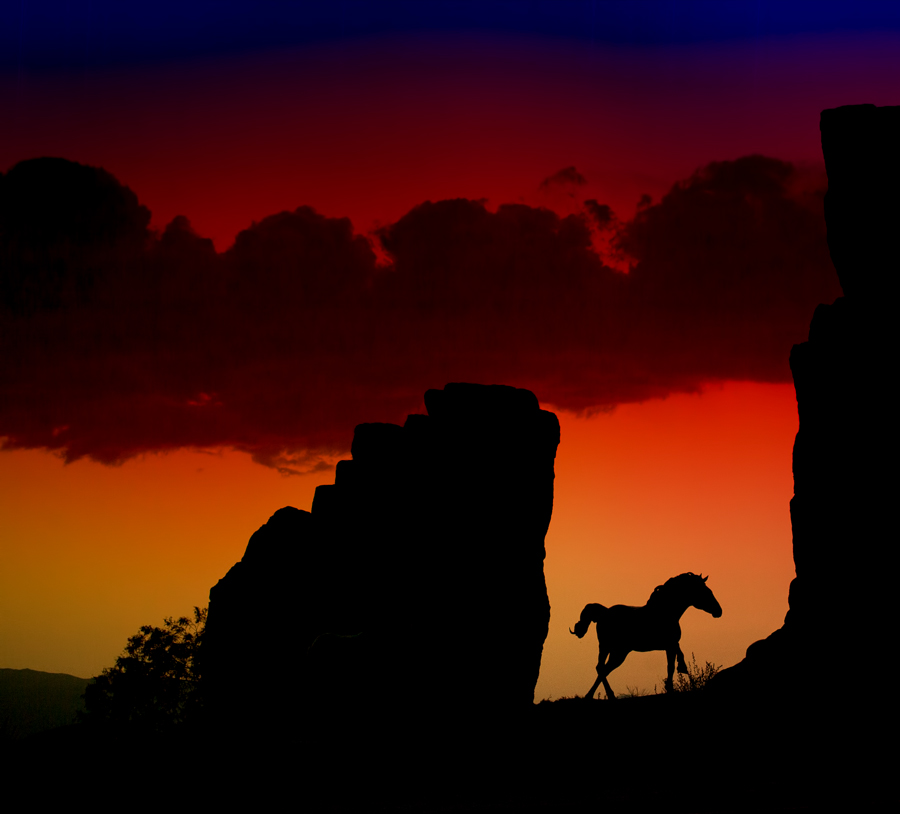 Horse With No Name

I posted this photo on several photography sites and received great reviews.  Evidently the image was pleasing to some people other than myself.

Question:  Is a pleasing image enough in and of itself, or, to be pleasing and acceptable, does the viewer need to approve of the way it was produced?   Does the artist need to reveal or describe the techniques and process used to produce the image, before the viewer can evaluate whether that image is good or not? Does a painter tell us the sizes and types of brushes he used, justify the reason why his abstract of a person only has one eye, why he painted tree leaves turquoise, or why his sunset is in black & white when his eyes see orange and red?  Does he need to tell us where his inspiration came from in the first place?   Do we need to know all this information before we make a value judgment about the finished piece of art???

Consider this situation:  Several times I have observed people discussing and admiring a photo image.   Then when one says something like, "oh that must have been photoshopped",  the value of the photo is dismissed as not being as worthwhile, despite the fact that it is a great image.  I think that while digital photography and using advanced technology to create beautiful art has opened up amazing opportunities for artists, the general public is not quite up to speed or accepting.  For many people, a photo is still just a photo and adding to it or taking away from it is cheating and devalues the finished piece of art.

I wish these people could have been at the workshop I attended last week.  A professional photographer, educator and digital artist talked a bit about Ansel Adams and showed and discussed some of his most famous photographs.  He showed pictures of his original negatives and then what the finished, famous photos turned out to be, (which incidentally, looked nothing like the original photographs after he spent hours in the dark room)!  If the general public knew the extensive manipulation Mr. Adams did to produce his work, I would not be having this discussion since he is still one of the most famous and well known photographers of all time.  The bottom line is that photography has ALWAYS been about art, and has ALWAYS been about the artist's views and unique renditions of life and reality.   I've said this before, and this professional photographer echoed my sentiment, that if Ansel Adams were alive today he'd be an avid proponent of digital, Photoshop and every other editing program or medium that would make his work as an artist easier!

Now, even though I don't think you need to know how I produced the above photo to enjoy it,  for your amusement (I hope), I will show you my straight out of the camera shot and tell you the story and inspiration I had in going from the beginning shot to the final image above.  Drum roll please........expect to be wowed........here it is: 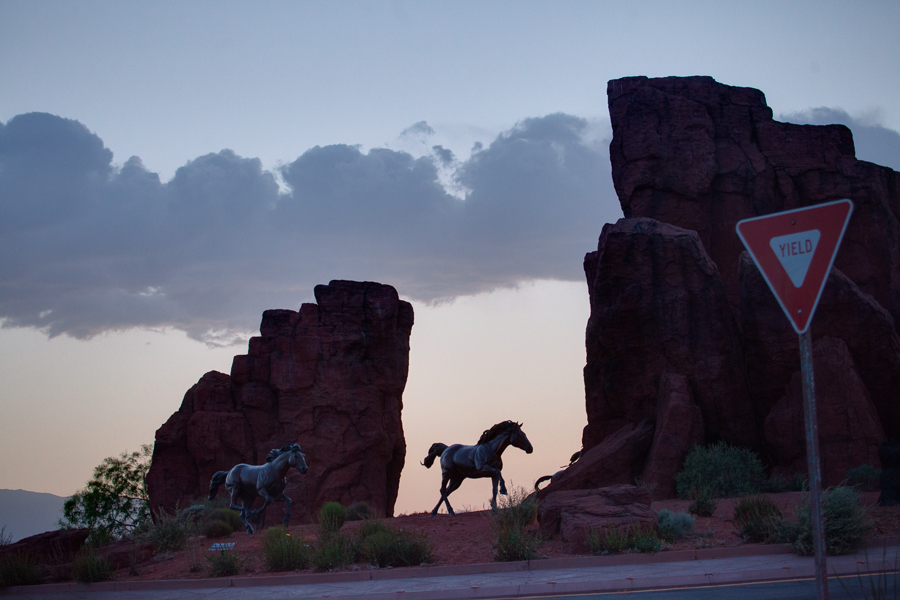 TA DA!  What?  You're not wowed???  Didn't think so.  Probably even disappointed.  Well when I downloaded this shot on my big screen computer monitor I wasn't disappointed, in fact I was excited.  Because when I took this I already had the inspiration and vision of what my final image would look like and this was the perfect starting point.  In other words the photo became my beginning canvas.

But let me start at the beginning.  This is a roundabout (traffic circle), that I go through often when we are at our little casita in southern Utah.  The artwork of this roundabout is truly beautiful in reality.  The big rock outcroppings are all manufactured, (not real), although they look perfectly real, and all around the circle are beautiful wild stallions, horses in bronze, and on the side not showing is a handsome native American warrior galloping on one of those beautiful horses.  (You can just see a bit of him behind the right rock, that I removed in the final image because it was distracting.)

One evening I was driving there at sunset, and in my mind's eye I could see a stunning image just waiting to be revealed.  I've had that image in my mind for several months, and finally a few weeks ago I grabbed my camera and decided I would make that vision a reality.

Capturing the actual image was the hardest part.  After walking all around, I realized that in order to isolate one of the horses in the space between the rock outcroppings and still be facing the right direction to capture a silhouette image after the sun went down,  I had to be standing right in the middle of the street.  Of course there was no time to set up a tripod.  I had to wait for an opening in the traffic, run out and snap a few shots, then quickly get out of the way of oncoming cars.  I did this numerous times, from various angles and I still didn't get the horizon level.  I didn't worry about that or the lovely 'yield' sign I managed to include, because all that would be corrected later.  And believe it or not, because I have my camera set to shoot RAW images, there was still a lot of color left over from the sunset, that I was able to bring back when I was creating the final image.  It was still not as dramatic as the image in my mind, however, so I worked until I got the colors and mood I wanted.

That's it!  If you stuck with me through this, I hope you enjoyed my journey from beginning inspiration to end result.  For me, it is a very fun and satisfying experience!

P.S.  Here's a link to Scott's Sunset Sunday to see another beautiful sunset. 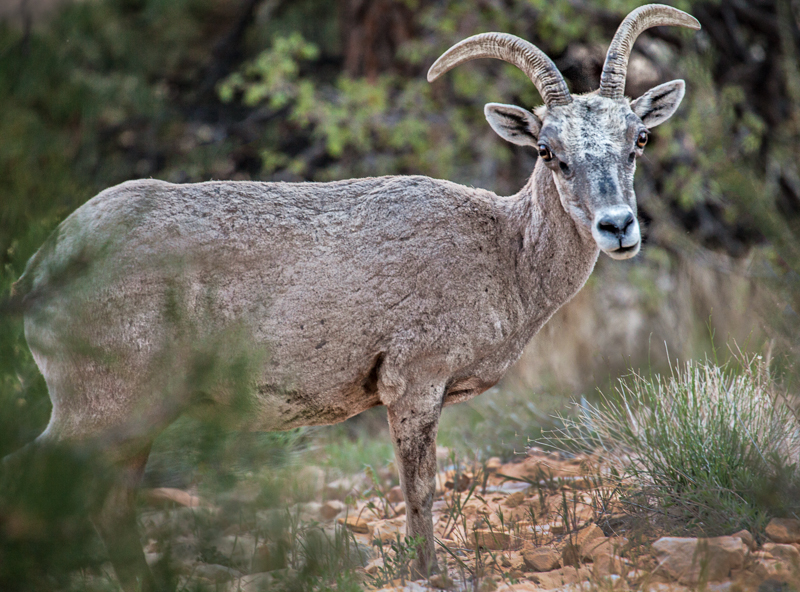 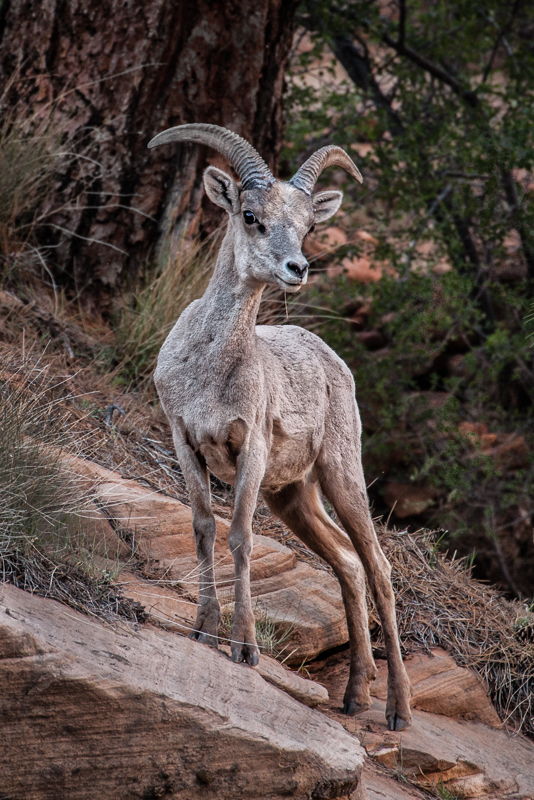 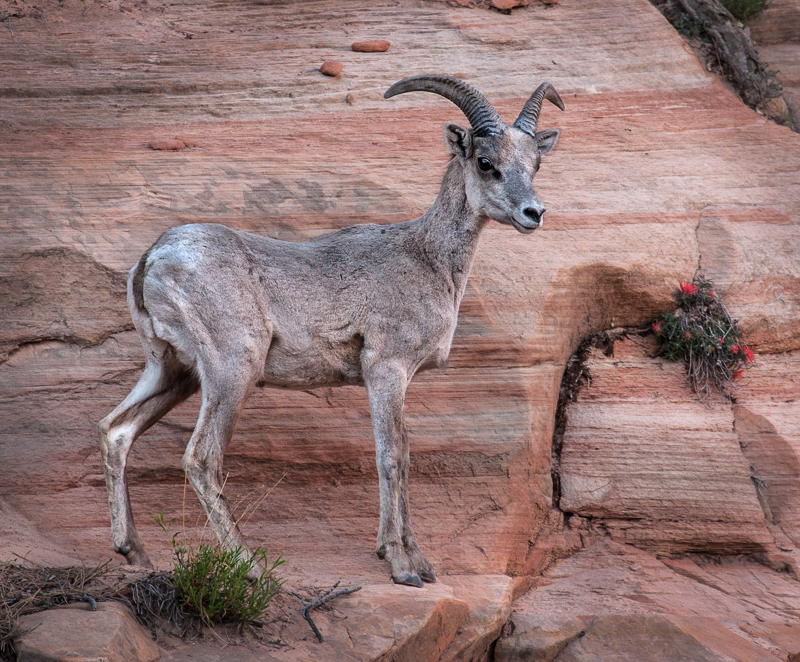 It is a common sight to see them roaming around tourist areas, and they allow humans to get fairly close because they have learned they have no need to fear us.  I stopped along side the road in the early evening where a fairly large herd was looking for dinner.  I stood in front on my car and was able to take the above shots.  Soon they decided 'the grass was greener' on the other side of the road, so one after another they crossed to the other side. 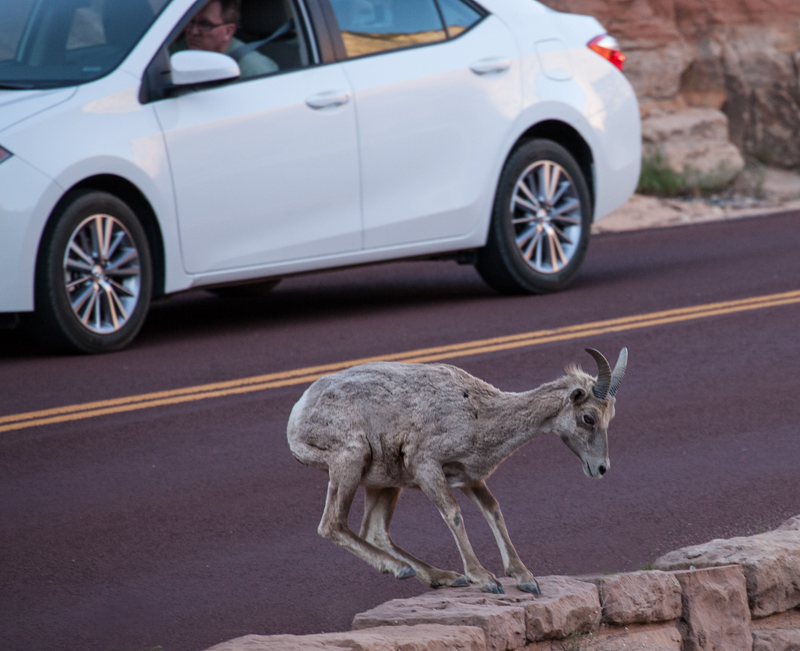 From the look on the driver's face, I don't think he even saw this little guy moving quickly to get out of his way!  Maybe they should be afraid of humans in cars! 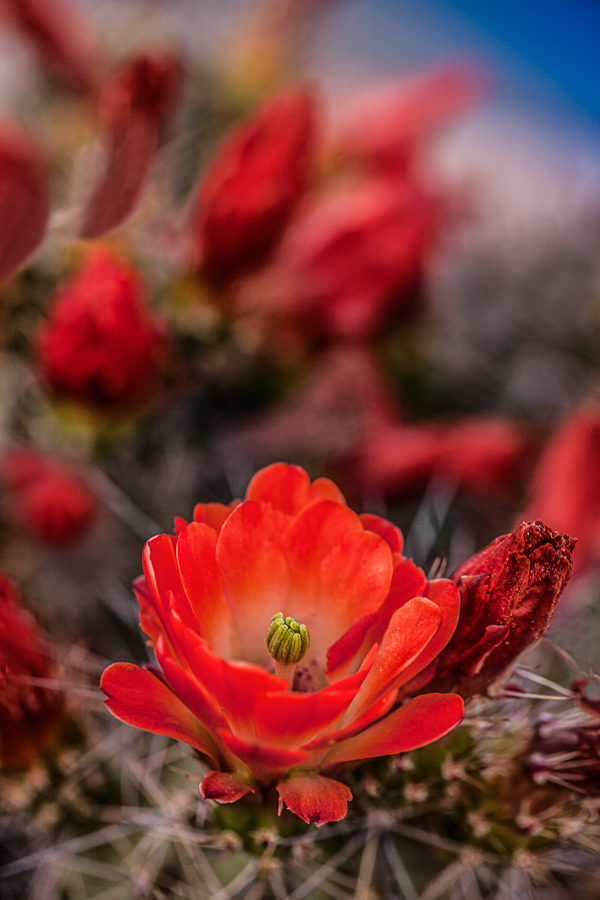 Scarlet Beauty
Posted by What Karen Sees at 7:04 PM 7 comments: